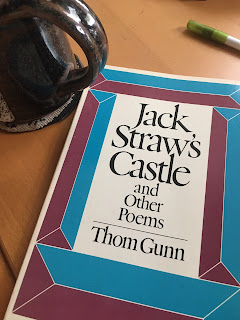 Truck put me off on Fell.
I'll walk to Union Square.
And watch the homeless there
From jailhouse and hotel.
And liable to none.
I've heard the long freight trains,
The cars marked with home names.
Mom wouldn't know her son.
I was a gentle boy.
That dusty Texas town
Was good for settling down.
The girls were clean and coy.
Had everywhere to go,
And thumbed around the nation.
It's like improvisation
Inside a tune you know.
The highways in the bone
Phrase after phrase unwind.
For all I leave behind
There is a new song grown.
And everywhere to go.

Thom Gunn (1929-2004) was a British, then American poet, moving to the US when he was about 30, finally settling in San Franciso. Jack Straw's Castle was his volume of 1976. A few of the poems are set in New York City, but most in California. 'Hitching into Frisco' is one 'Three Songs' from that volume.