Eça de Queirós' The City and The Mountains 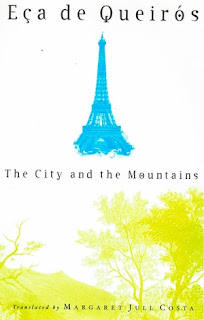 Jacinto is born and raised in Paris, the only son of an only son of a wealthy family and Jacinto is fantastically rich. His grandfather, an ardent royalist, left Portugal when Miguel I was exiled in 1834. It's the 1890s when the novel starts and Zé Fernandes is in Paris for his studies. The two become friends, and it's Zé Fernandes who narrates Jacinto's story. "It's for this reason we named him 'the prince of Great Good Fortune.'"

In Paris, Jacinto lives alone but for his servants at No. 202, Avenue des Champs-Élysées. This appears to be an imaginary address, but if it existed, Jacinto would live right next to the Arc de Triomphe. Did I mention wealthy?

Zé Fernandes goes back to Portugal for family duties; when seven years later he returns to Paris, he renews his acquaintance with Jacinto. In the interim Jacinto has used his great wealth to acquire and enjoy all the technological marvels available in Paris in the 1890s.

Or, maybe, not enjoy them.

The Paris part of the novel, the first third or so of its nearly 300 pages, is a wonderful satire of the state of technology in the 1890s. If there's a gadget, Jacinto has to have it. There are those I could name now. This goes well beyond electric light and the telephone. Jacinto has a teletype news service in his home. There's the Théâtrophone, a dedicated phone line that connects the user to the opera or theater. But these gadgets inevitably fail, the electricity just before an entertainment Jacinto had planned. The hot water system breaks, scalds and then floods the household. A prize fish course is stuck between floors when the dumbwaiter fails. And can you imagine listening to even a comic opera singer over a telephone line of the 1890s? ("Nothing but squeaks and buzzes!")

Then even the library,...

"My friend brushed his finger lightly against the wall and a circle of electric lights, which glowed against the carved wooden ceiling, lit up the monumental ebony shelves. These were filled by over thirty thousand books--bound in white, scarlet and red, with just a few touches of gold--as stiff and erect in their pomp and authority as an assembly of learned doctors."

...fails to delight after a while. (Nooooooo!)

When the gadgets fail, Jacinto goes on to obsess over various philosophical fads: Nietzsche, Ruskin, finally pitching on Schopenhauer and pessimism. (Yes, yes, I did just reduce Nietzsche & Ruskin to fads, but that is their function in the novel.)

Something must be missing from Jacinto's life. Just what could it be? 😉

Eventually Jacinto is obliged to go to Portugal, a country he's never been to, but the source of his wealth. He will be present for the rededication of the chapel in his ancestral family home. He owns several other estates, but this one is in the remote northern mountains of Portugal in a town called Tormes. The region is primitive and poor even by the standards of Portugal of the time.

Jacinto attempts to import all his gadgets to Tormes and when he discovers the real state of the countryside decides to improve the lot of the locals: new housing, modern farming techniques, new industries. (A cheese dairy!) His estate manager Silvério and Zé Fernandes attempt to instil a little realism in him, but...

It's not giving much away to say it's marriage that removes the megrims from Jacinto's life--halfway through I was describing the plot as I'd read it thus far, and the Other Reader said, well, Jacinto is going to get married and that will solve everything.

And so it was.

I'm not one to necessarily object to predictability, especially in a marriage plot, but the second half of the novel, while still fun, is not the equal of the first. The girl has little character other than her great beauty, and there's no real tension to keep them apart. But happily ever after isn't a bad ending, and suitable enough for our 'prince of Great Good Fortune.'

Though the 'happily ever after' doesn't extend to Zé Fernandes, whose romantic interest moves to Brazil and who makes a last unhappy trip to Paris.

José Maria de Eça de Queirós was the Portuguese consul in Paris when he was writing the novel, though he traveled to Portugal more often than Jacinto. It was his last novel, almost, but not quite, completed, with most of it in proofs, at his death in 1900; the last page or so was written by a friend after his death based on notes.

I read his novella The Yellow Sofa a couple of weeks ago and that seems to have sent me on an Eça de Queirós binge. The library assisted: 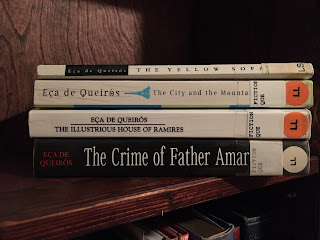 with The Maias also on the way.
Comparisons to Flaubert seem to be de rigeur--three of the six blurbs on the back of The City and The Mountains cite Flaubert and apparently this trend goes back a while: Wikipedia tells me Zola compared Eça de Queirós with Flaubert to Flaubert's disadvantage. I have the suspicion the two I've read so far are unrepresentative, but this seems weird to me. Eça de Queirós is far funnier and much more genial than Flaubert. But if it is true, then this is his Bouvard et Pecuchet: it was unfinished at his death (though much closer to finished than Flaubert's novel) and is built around an encyclopedia of absurdities. I can't imagine Flaubert would have solved Bouvard or Pecuchet's mania by marriage, though...
If you know Eça de Queirós, which should I read next? Which should I have already read?
Posted by reese at 11:28 AM