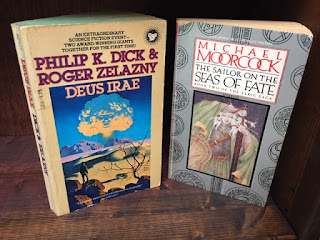 Philip K. Dick & Roger Zelazny teamed up to write this post-apocalyptic tale of a quest to find (or at least see) god.

Carleton Lufteufel (air-devil) was the head of a U.S. war agency from 1983; in a conflict with the Chinese he dropped the 'gob', the great objectless bomb, and the atmosphere was destroyed. The Krankheit (sickness) followed, and those few humans who do survive are at higher risk for genetic mutations and can barely scrape up enough food to eat. Intelligent lizards and bugs and leftover robot A.I.s have taken over some of the space once occupied by humans.

And in the process Carleton Lufteufel became a god.

The process to becoming nor the powers Lufteufel has as god are particularly specified, but there is a new religion, the Servants of Wrath, devoted to his worship. Tibor McMasters, born without limbs but still a notable painter, is tasked with painting a church mural (a 'murch') to exalt his worship. McMasters declares he can only paint this mural properly once he's seen his god, but since Lufteufel is still out there somewhere it ought to be possible. He sets out on a 'Pilg', a pilgrimage to see his god, in a cart drawn by a cow, across the ruined and desolate country.

Pete Sands, on the verge of converting to Christianity, which still exists in our post-apocalyptic world, has been taking drugs to see the Christian God, a technique his spiritual adviser disapproves of. Pete Sands follows McMasters on his quest, either to help or hinder or both, since he likes McMasters personally, but doesn't like the new religion.

Do all pilgrimage narratives suggest Pilgrim's Progress? I've been reading Bunyan lately, and it feels like there are similarities, but maybe it's just the similarity between like objects. I couldn't point you to a particular point of reference. (Though maybe the use of allegorical names?)

Lufteufel meets up with the pair by design, under the name of Schuld (guilt), and arranges his own death, and the world feels a certain lightening.

Hmm. Why someone who blew up the planet might feel guilty I can understand; why this particular death--even though it is the death of the human embodiment of a divinity--should make the world better, I'm not sure I do.

I know PKD pretty well, but Zelazny hardly at all. Wikipedia tells me that man become god and/or god become man is an important Zelazny motif. Drugs to see God and the use of German are definitely PKD contributions. I find PKD a pretty great writer, but too much production and carelessness mar a lot of his work. This one, for whatever reason, didn't entirely convince. Still, it was fun.

The Sailor on the Seas of Fate

This is the second of the original Elric novels by Michael Moorcock, though two of the (three) stories had appeared before and were then rewritten for the novel.

I reread the first in the series Elric of Melniboné to get into the proper space. Elric ("It is the colour of bleached skull, his flesh;...") is the albino emperor number four hundred and somety-something of the decadent kingdom of Melniboné. Sickly and doomed. Humanoid, but not human. At the end of the first, he's just recovered after an attempted usurpation by his cousin Yyrkoon and he's acquired his sword Stormbringer. Nevertheless he decides to leave Yyrkoon on the throne as regent, and go off on a wanderjahr.

In the first adventure he sails into the future and is tied into the Moorcock eternal champion mythos, united with Corum, Hawkmoon, and Erekosë to defeat a brother/sister pair of evil sorcerers.  I thought this the weakest of the three.

In the second he comes across a figure from Melnibonéan legend Saxif D'Aan, who, across the centuries, has been pursuing the one girl he loved, the girl he killed in a fit of jealousy. Now in the present Saxif D'Aan has found a lookalike. Is there a way to right this ancient wrong?

In the final tale, Elric with a few companions journeys up a river through a jungle to ruins that may mark the origins of the Melnibonéan race. Seeking his past. Our Elric is a melancholy hero and unhappy with his role as emperor. Are these his roots? If he learns them, what will it do? Is this a journey to the heart of darkness or the heart of light? He does find a Kurtz, but maybe no real answers.

And in this his sentient sword Stormbringer first reveals its treacherous nature.

I knew, but had half-forgotten how good these were. Have I just committed myself to rereading the whole series? Maybe...

"You feign cynicism, yet I think I've rarely met a man so much in need of a little cynicism," Count Smiorgan tells Elric at the end of the third story.

Oh, and drugs. Elric is only kept alive by his sorcerous drugs, at least until he acquires Stormbringer. Well, it is 1976... 😉

Thanks to Simon and Kaggsy for hosting. (Love the logo!) 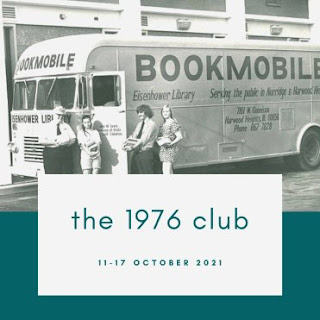