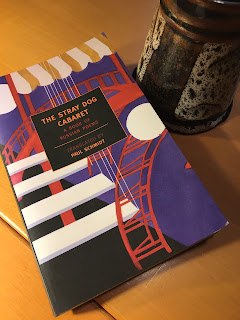 All I want to do is
escape the madness here.
To rise into the light
where I can disappear.
Where you can be like light--
and happiness is mine!--
and learn from every star
what it means to shine.
All I want to say is,
the whispering you hear--
that's the sound of light
I whisper in your ear.
The thing that makes us light
the thing that makes us shine
is that I whisper words
and that this voice is mine.

I've been reading Mandelstam in W. S. Merwin's translation and I'm afraid that has sent me back to reading those few poems of Mandelstam's that are in Paul Schmidt's collection of 20th century Russian poetry The Stray Dog Cabaret. I don't know, but for me, the best thing that can be said about the W. S. Merwin translations are that there are more of them. (And, yes, that is damning with faint praise.) What was (is?) it about American (and Canadian) poets of a certain era that they were so very afraid of rhyme? Whether it's appropriate or not for one's own poetry, it feels false to translate somebody like Mandelstam without it.

This poem dates from March 23, 1937. Mandelstam had been arrested in 1934 after the Stalin Epigram came to light. He had assumed its discovery would mean a death sentence, but after interrogation and torture he got off lightly (?) with internal exile to the Ural mountains, only to be rearrested in 1938. He died later that year.