"And just because they're Canadians you know, it doesn't mean they aren't any good." [128] 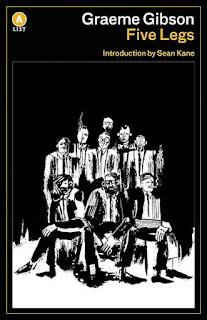 Five Legs was Graeme Gibson's debut work of fiction, first published by the Canadian independent House of Anansi in 1969. The back of my 2012 reissue suggests it was 'a breakthrough for Canadian experimental fiction.' The need for a breakthrough was certainly felt, and the main characters in the novel are all wondering what it means to be--is it even possible to be?--a Canadian artist.
The basic story is this: Lucan Crackell is an English professor at the University of Western Ontario, when one of his M.A. students, Martin Baillie is killed by a hit and run driver. Baillie had only just become engaged to Susan. Baillie hailed from Stratford, Ontario and the funeral will be there (an hour's drive from London normally). Crackell is planning to take two of Baillie's fellow students with him; at the last moment he's cadged into taking a third, Felix Oswald, as well. It's winter; there's a snowstorm with black ice and whiteout conditions, but they make it; the funeral happens, and Baillie's remains are put into the ground.
But that bald outline doesn't much give a sense. You did notice the word 'experimental' up there, right? The novel is told entirely in stream of consciousness and quoted speech. (The opening quote is a discussion among painters overheard by Crackell.) Of the six sections, the first three are in the consciousness of Lucan Crackell, the last three in that of Felix Oswald.
We wake up the morning of the funeral with Crackell and his wife Rose. The opening paragraph in its entirety:

"RRRINGGG! And aware suddenly of the day. Grey chills. Blessed Jesus what a night, what a terrible night. Like a mouth full of." [1]

There was a cast party the night before--Rose does makeup for a play--and Crackell is badly hungover. Rose, too, feels a bit nauseous, but Crackell is hoping in her case that's morning sickness and not alcohol. "Within her perfumed body grows my seed. Dear Heaven I hope it's true!" [37]
But otherwise Crackell's thoughts generally revolve around the past. He has three events which haunt him: the abuse he suffered from both boys and masters at his boarding school; his affair with Vera, who carried his child but would neither marry him nor have an abortion and moved to England--does he have a ten-year-old child running around in England?--; and, most relevantly for his current trip to Stratford, his dismissal from his job teaching there for public drunkenness. At times he feels his life is over: "And my life's ploughed under in this world; the seeds are dead." [35]
I don't--or at least not any longer...--have much sympathy for people who feel their life is over at 30. 😉
Should he have gone to Europe? Would Vera have had him if he'd thrown it all over and followed? Quotes from T. S. Eliot run through Crackell's head; it's pretty clear Crackell once had artistic aspirations, and England is the place of writers--at least if you're a Canadian in the 60s. Now his aspirations don't much run past propagation.
Going to Europe's a motif. Martin Baillie was torn between two women: Susan and Valerie. It's Susan who wants him to finish his degree, settle down, teach; she has long, creepy conversations with Crackell about how Martin will settle down, won't he? Valerie would have run off to Europe with him; he could have lived cheaply and wrote. He'd decided on Susan--at least according to Susan--and then later that night was killed. Though Oswald believes this was true, and unfortunate.
Then we switch to Felix Oswald. While the jumble of thoughts in Crackell's head run to the events that sank him in the past, Oswald's run to fantasies in the present. Oswald, as Baillie's roommate, is pressed into service as a pallbearer. I suppose anyone who has ever served as a pallbearer has had fearful thoughts about what if I drop this thing; Oswald's run to comic excess and are aided by the ice and snow of the day.
There's a hostility between Oswald and Crackell. Crackell failed Oswald on an exam once, which led to Crackell hating Oswald, though not necessarily vice versa. (Which strikes me as absurd, but also quite true.) But it's the hostility of sameness. From one of the Felix Oswald sections, Oswald's thought: "He [Baillie] had a choice you see, just like I've, maybe even you [Crackell] had once." [218] The choice between escape and buckling down. Accepting responsibilities, if indeed that is what it is. Oswald, too, is writing:

"You're doing some writing." [This is Crackell to Oswald in an Oswald section.] Sudden pain and glaring. I...Nodding, and. It's crap, all crap he.
"Yeah." Ducking my head, thinking. I've been thinking. Uncertain and smiling.
"How's it going?" Who told him, shifting; how does he know?
"Well, uhm," it's...
"Difficult, yes...Particularly in Canada, it seems,..." [236]

Does Oswald escape, to Europe, assuming that is the answer? We don't learn, but the novel ends in an Oswald fantasy, "...then running ahead to the heat, he's running, skipping, free-sliding." [268]

The introduction, by Canadian cultural studies professor Sean Kane, says that the novel sold well when it first came out, even as well as a non-experimental Canadian novel might, but I had a hard time finding any contemporary reviews online. One quoted on the back of the book compares it to Pynchon, but that doesn't really seem convincing, despite those two alluring women whose names begin with V. Kane calls it "the first novel to bring the full artistry of literary modernism to Canada." Is that true? Only in 1969? I don't really know.

But the use of stream of consciousness is the signal of literary modernism and, of course, the ancestor is Joyce, Ulysses in particular, and the consciousness of Leopold Bloom, and not Molly, in even more particular. (And certainly not Mrs. Dalloway.) "Couldn't, no I couldn't ugly thing disease I might." [187] Poking around in my copy of Ulysses, I can't entirely tell you why that reminds me of Joyce, though it does. But then this: "Tastes of urine, it does! I can always taste it." [223] There, I know. Just take a look at the start of chapter two in Ulysses. 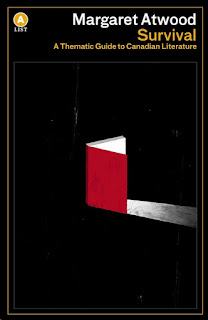 While I couldn't find much in the way of contemporary reviews, the book is an important exemplar of Margaret Atwood's theses in Survival, her 'Guide to Canadian Literature,' of 1972. She notes the interest in what it means to be--to survive as--a Canadian artist, the theme I've highlighted, in one chapter, but she also looks at the relationship to wild animals and nature that's definitely there--the title comes from a deformed ox one of the characters sees--a theme I've basically glossed over...
From Survival I know (though I haven't read the novel myself) that Gibson's next novel in 1971 Communion continues the story of Felix Oswald.
In any case Gibson must not have been offended by her analysis because a year or two later he became Mr. Margaret Atwood, though in the mid-70s, it was perhaps not yet clear she was going to become the more famous author. They remained married until his death in 2019. Maybe ten years ago we saw the two of them here in Toronto at a small theater's production of a Molière play, where their very appearance generated an audible buzz.
And is the reason I read the novel now for the Margaret Atwood Reading Month hosted at BuriedInPrint. And thanks to Marcie for hosting!