Some clerihews by W. H. Auden 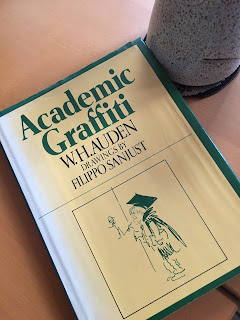 Edward Lear
Was haunted by the fear
While traveling in Albania
Of contracting kleptomania.
-o-
Louis Pasteur
So his colleagues aver,
Lived on excellent terms
With most of his germs.
-o-
No one could ever inveigle
Georg Wilhelm Friedrich Hegel
Into offering the slightest apology
For his Phenomenology.
-o-
When the young Kant
Was told to kiss his aunt,
He obeyed the Categorical Must,
But only just.
-o-
Charles Dickens
Could find nothing to say to chickens,
But gossiping with rabbits
Became one of his habits. 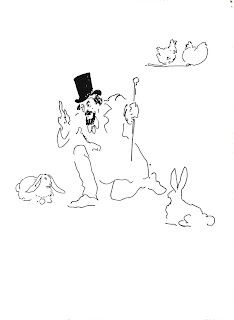 W. H. Auden's series of clerihews appears first in Homage to Clio, but then with illustrations by Filippo Sanjust in Academic Graffiti. That's Sanjust's drawing above of Dickens/with rabbits and chickens. The chickens look rather offended to me.

The clerihew form was invented by E. C. (Edmund Clerihew) Bentley (1875-1956), also author of the mystery series featuring Philip Trent, the first of which is Trent's Last Case. (The last shall be first?) Since we're here...I can't resist quoting my favorite Clerihew clerihew:

George the Third
Ought never to have occurred.
One can only wonder
At so grotesque a blunder.

Edmund Clerihew Bentley
acted most irreverently,
like he was one of the playahs
with Dorothy L. Sayahs.

Or supply your own concluding couplet! 😜
Posted by reese at 2:54 PM