"I suppose everybody has at least heard of Trent's Last Case." 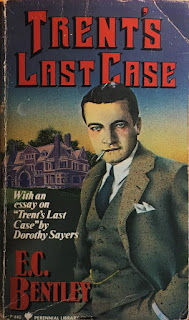 Dorothy Sayers wrote that in an undated talk she was going to give on radio but didn't. It may once have been true, but I doubt it is anymore, even among serious readers of mysteries. Trent's Last Case by E. C. Bentley came out in 1913, it was the first Trent case Bentley wrote, and Bentley wrote only two more. There aren't a lot of them and it's a long time ago. Its fame has long since yielded to obscurity.

Which is kind of a pity.

Part of its importance is just because it came early, it's true. Trent, a painter and a newspaper reporter, is supposed to be a genius detective and we're told of other difficult cases he solved for which he revealed his solution in the Record, a London newspaper. He may be a genius detective, but in this one he's wrong not once, but twice, a trick picked up by Ellery Queen on more than one occasion. And Trent falls in love with a suspect, which definitely was an influence on Dorothy Sayers herself, cf. Strong Poison, and it was a motif that went on to have a long history, going from the innocent and hardly suspected Mrs. Manderson in this one to the accused Harriet Vane in Strong Poison, to Sam Spade's actually guilty of something love Brigid O'Shaughnessy in Maltese Falcon, to the even guiltier love object of Kinsey Millhone in Sue Grafton's 'A' Is For Alibi.

The setup is this:  the first chapter tells us Sigsbee Manderson is a big man in finance; the second that he's dead, shot through the eye. Who did it? He was estranged from his wife and he was ferociously jealous of John Marlowe his personal secretary. He'd also created enemies among the American labor movement; they had a long reach; was it some American anarchist who killed him? This came out a year before Arthur Conan Doyle's Valley of Fear, another novel where the long arm of American labor was featured, and I wondered if it was an influence there as well, though it may be that Pinkerton's and Haymarket rioters were simply in the air.

Or was it somebody else entirely? I suspect you know the answer to that question, even if you haven't read it.

Anyway, it was pretty good, I thought. A little overwritten at the start, but then it settled down. There was some rom, but it was a little lacking in com, which is a pity and a surprise since the C in E. C. Bentley stands for Clerihew, also the name of a comic verse form he invented:


George The Third
Ought never to have occurred.
One can only wonder
At so grotesque a blunder.

Vintage Mystery Challenge. Gold.  Why. Best Of List.
Posted by reese at 10:37 PM