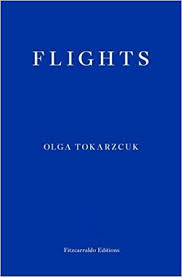 Two weeks ago the Polish author Olga Tokarczuk's Flights won this year's Man Booker International Prize. Now there's a reason to finish a book I started a while ago...

That's a little unfair, though, because it gives the impression I disliked the book, which isn't true. What is true is that it offers somewhat fewer of the simple narrative pleasures--though not none; it can be essayistic and is not particularly a page turner; there are epigrammatic sections like the following:


A Very Long Quarter Of An Hour

Which is amusing, but may not advance the story much.

The frame narrative is told by an unnamed character who, I suppose, is very much like Olga Tokarczuk in person. She travels to conferences on planes and she talks to people in her travels. The stories she is told in these conversations get embedded in the overall narrative. And here Tokarczuk is good at the basic pleasures of storytelling. A woman disappears for a few days with her son during a vacation in Croatia; the narrative follows her husband, who worries, and then becomes jealously obsessed. Another woman, a Russian, is saddled with a handicapped son and a husband back from some war suffering from PTSD. She tries homelessness for a few days. In a third story, a dying man calls on his ex-lover to administer a mercy killing; she sneaks off, leaving her husband for a few days, pretending she's going to a conference on her subject.

I can see how all these fit into our theme of flights.

But then there's a recurring strand about the preservation of bodies. Mummification and the like. Body parts preserved in bottles. This is more gothic in nature, though it's not treated exploitatively, but dispassionately. Chopin's heart after his death is smuggled into Poland. The most extensive of these was the story of Philip Verheyen who in the seventeenth century wrote and illustrated the first comprehensive description of human anatomy. Interesting enough I suppose, though it occasionally pinched at my squeamishness. I also couldn't see how these stories connected to the general theme. They just seemed to stand off to the side.

So I liked it but with reservations. I didn't read any of the competition so I can't say whether the judging committee chose well or poorly. If you like things like The Man Without Qualities or W. G. Sebald this should suit.
Posted by reese at 5:48 PM