"I love the French edition with its uncut pages. I would not want a reader too lazy to use a knife on me." 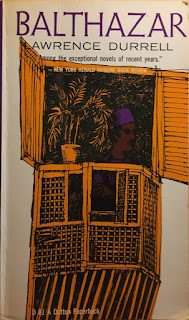 A bit of bravado on Lawrence Durrell's part? It's ostensibly an obiter dicta of Pursewarden, but Pursewarden is one of two novelist characters in the series, both of whom are, in different ways, stand-ins for Durrell.

In any case, I'm not inclined to take up the challenge; I like the series and it's more commented upon (both good and bad) than read I'm sure; and no doubt more neglected than either of those choices. So, no knife.

Balthazar (1958) is the second of the novels of the Lawrence Durrell's Alexandria Quartet and it operates as a corrective to the first; without the corrective it would be all too easy to take Justine as just the romantic blatherskite of some not very successful decadent writer. It's not, but it does impersonate such a thing pretty well.

Darley, the other novelist character in the series, with the same initials as Lawrence G. Durrell, has written a first volume Justine and sent it off to friends for comment. Mostly they neglect it, but one, Balthazar, a homosexual Greek doctor of their circle in Alexandria, drops in on him with the text marked up as the "Great Interlinear," and Darley learns a lot of what he wrote in the first volume was untrue. So he writes a new book covering the same period of time with this new information.

The most important corrective is that Darley, who was in love with Justine in the first volume, assumed Justine was in turn in love with him. But Balthazar says she loved Pursewarden and Darley himself was just a decoy or a substitute. He needs to rethink everything that happened.

Durrell writes in a brief headnote:


The characters and situations in this novel, the second of a group--a sibling, not a sequel to Justine--are entirely imaginary, as is the personality of the narrator. Nor could the city be less unreal.

Modern literature offers us no Unities, so I have turned to science and am trying to complete a four-decker novel whose form is based on the relativity proposition.

Three sides of space and one of time constitute the soup-mix of a continuum. The four novels follow this pattern.

The three first parts, however, are to be deployed spatially (hence the use of "sibling" not "sequel") and are not linked in a serial form. They interlap, interweave, in a purely spatial relation. Time is stayed. The fourth part alone will represent time and be a true sequel.

That makes it sound more precious than it is; perhaps the use of 'soup-mix' will give us the right sense of Durrell's attitude to his plan. In any case there's a quote (Auden, I think?) about an author's theory of his own work: that it is merely so much scaffolding towards the construction, and it should be kicked away at the end to allow the building to be appreciated on its own.

The Other Reader asked if this going-over made it dull and my answer was no. (I am unable to say how anyone might react to Durrell's hothouse prose style, though; it is an exotic taste.) Durrell likes big events; the first novel ends with a hunt scene in which Darley is worried an accident is being arranged for him--Justine's husband suspects. And in fact another character is killed (or murdered or something) during the hunt. Balthazar also ends with a grand set piece, at Carnival, and again one of the characters is murdered, with a subsequent investigation. Though the two novels cover the same period of time there is more than enough difference in the events to keep it interesting; Durrell manages his structure quite well. The third, Mountolive, begins a little before the events of the first two but then covers the same time period; it, too, has a big set piece and it, too, gives a number of picturesque travel details about Alexandria and Egypt. So, yes, it's a pretty good read.

Another of Pursewarden's so-called Obiter Dicta:


"I have always believed in letting my reader sink or skim."

Go ahead and read it fast, perhaps, but there's no need to skim.