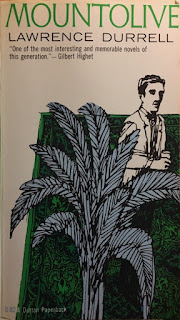 And it's on to Mountolive, the conventional one.

This, the third novel of Lawrence Durrell's Alexandria Quartet, came out in 1958, and was the second of the quartet to come out that year. According to Ian MacNiven's biography of Durrell, he'd been meditating the subject of the quartet for almost two decades when he began to write it in earnest. It was going to be set in Athens for a while rather than Alexandria, though that's hard to imagine--it seems so tied to its place. But when he started to write in earnest, he didn't slack off: he wrote four volumes, totalling a bit over 1100 pages in my edition, in something like two years. Zoom, zoom.

Mountolive is the conventional one in two senses: it is written in a more staid (as staid as Durrell ever gets I suspect) third person which mostly moves forward in time instead of bopping around. But also because David Mountolive, later Sir David, is a conventional man, especially by the standards of the Alexandria Quartet circle. He's a professional diplomat who eventually becomes the British ambassador to Egypt. He has his love affair, too--love is the avowed theme of the quartet--with the mother of the rich Coptic banker Nessim Hosnani, but in the end turns away from it. And, as fits a story about a diplomat, this novel reveals a political dimensions to events of the first two novels--the death of Capodistria, the flight of Justine, the death of Narouz Hosnani--that first seemed motivated by amorous passions. It adds another layer of complexity to the characters and to the story, something all to the good.

But while Durrell in his real life worked in minor diplomatic roles, he's not at heart a diplomat. He hangs out with demimonde artists and prostitutes, the lost and the damned. Staid conventionality doesn't come naturally to him. Agents and spies in minor European capitols or colonial outposts suggest Eric Ambler or Alan Furst and Durrell just doesn't do it as well. There were moments in this one when I wasn't really convinced.


He could not even feel happy without feeling guilty.

Now Durrell was not a stupid man, and to simplify is to falsify, but that's the problem as he sees it in a nutshell: one should be in love, be honest about sex, and be happy without letting guilt get in the way. But I think Brave New World is more like the world today: we feel guilty when we're unhappy, not when we're happy. Here: why don't you just have some soma?

Ah, well, I wasn't reading it for the philosophy, but for the talk and the scenery and the prose.

I've finished Clea, with more thoughts to go. I need to get posting!
Posted by reese at 6:43 PM