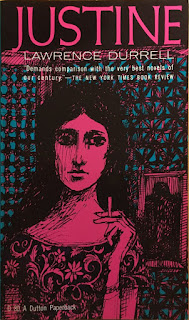 Justine is the first volume of Lawrence Durrell's Alexandria Quartet. It came out in 1957 and was the beginning of a boomlet to give Lawrence Durrell the Nobel Prize in Literature.

Durrell was one of those writers for whom the world would be saved by honest talk about sex. With that attitude, of course he was influenced by Freud. D. H. Lawrence, I'd say, stands at the head of this tradition in English, and Henry Miller, a great friend of Durrell's, is of the camp. Mostly men, but you could possibly add Durrell and Miller's friend Anais Nin. Justine's name is taken from the novel by de Sade, and each of the four books in the series begins with a quote from de Sade's Justine, though Durrell picks quotes more philosophical than prurient. (Knowing de Sade only by reputation, I'm not sure how difficult that is.) Thinking honestly about sex will save the world is an attitude that's hard to accept any more, though there may remain some truth in it for sexually marginalized communities. But if Durrell's outlook is now passé, can the novel series still work? Let's look into it!

The novel is told (mostly) in the first person voice of Darley, a writer still unsuccessful as of the time of the story. He falls in love with Justine, the Jewish-born wife of Nessim, a wealthy Copt banker. This is the main love triangle. Other characters include Clea, a painter, who previously had a love affair with Justine and is still pining for her; Pursewarden, a much more successful novelist; Pombal, a French diplomat and Darley's roommate, who passes on recommended prostitutes to Darley; Balthazar, an aging Greek homosexual doctor; Melissa, an exotic dancer dying of tuberculosis; and Scobie, a cross-dressing policeman. Quite a cross-section of ethnic and sexual types.

There are also extensive quotations from Jacob Arnauti, another novelist, a French-Albanian, who was previously married to Justine and wrote a roman à clef about her called Moeurs, though he himself has left the scene. With quotes from Moeurs and from Justine's diary and reports of Nessim's dreams set in a historical time, Durrell as Darley allows himself to jump around in time and POVs. But it all occurs in a rather elaborate hothouse prose:


We turn a corner and the world becomes a pattern of arteries, splashed with silver and deckle-edged with shadow. At this end of Kom El Dick not a soul abroad save an occasional obsessive policeman, lurking like a guilty wish in the city's mind...Pursewarden is speaking of the book which he has always wanted to write, and of the difficulty which besets a city-man when he faces a work of art.

Chosen relatively at random, but that's not unrepresentative.

Durrell was also a travel writer and writes well about places. I read his Bitter Lemons about Cyprus a while ago and liked it. I don't know Alexandria, but this felt exotic and he convinces.

Though this is basically not a funny book, but a melodrama, the diplomatic corps does provide some humor. The Other Reader and I both read Durrell's Antrobus stories and laughed at the Woosterish absurdity of British diplomats in Serbia and other places. That also shows up here in parts.

Despite the sometime elaborateness of the prose, and the tendency of multiple characters to speak in epigrams, I think it's a book best read quickly. It's also probably a book best read when you're young, which I'm certainly not now, and wasn't really when I first read the book twenty years ago. If you were young, you could read it for the talk about sex and literature. Nowadays I already have opinions about D. H. Lawrence and Joris-Karl Huysmans. But when you're young and don't know anything, and you come from the provinces, (well, lower-middle-class Chicago, north side near the lake, but not on the lake) you want to know about these things, you want to hear people talking about them, because nobody you know does.

Durrell doesn't really do irony in micro, but he does in macro, and this short novel, 250 pages in my edition, if read by itself, could feel like it fits the dismissive description of the Nobel Prize committee notes: 'monomaniacal preoccupations with erotic complications.' But reading it quick and moving on to the second (and third and fourth) of the series while the first in your head successfully complicates what might otherwise be taken as a rather simplistic novel. I read the quartet the first time in eleven days, on a road trip to Cape Cod, where the other guests at my father-in-law's getaway, a couple older than us, said, "Oh, yes, we read that. We liked it," rather dismissively. That felt very cosmopolitan, very Durrellian. I'll probably take longer than eleven days this time because who has the concentration? There are blog posts to write, Tracey Breaks The News episodes to watch, news items to get outraged over. Still I've finished the second already as I write this (Balthazar) and have started the third (Mountolive). They do successfully complicate the characters begun in the first novel. They are meant to be read as a series. The Other Reader asked me, which is the best? And I hawed and hemmed for a bit, but I couldn't say: in fact, any one by itself has merits, but the series has to be read as a whole for maximum impact. It's only a thousand pages. (Said with a smile.)

There are a number of reasons why I reread this series now, but one of them is I just finished Ian MacNiven's biography of Durrell from the Toronto Public Library. They only had one copy and I was worried they were about to decommission it; I've had that happen before. But also, via Kat's Mirabile Dictu blog, I read this. Which made me want to reread the Alexandria Quartet and maybe also pull some of the unread Durrell off my shelf.