"Every artistic movement from the beginning of time is an attempt to figure out a way to smuggle more of what the artist thinks is reality into the work of art."

That's the first sentence of the first numbered section of David Shields' Reality Hunger: A Manifesto (2010). It was making the rounds on the blogs I was reading at the time. I got it from the library and read it at the time and disagreed with it mostly, but enjoyed arguing with it. I'm not entirely now sure what made me want to read it again, but something did.

It's a defense of memoir, collage, and the blending of fiction and non-fiction. It was read as a manifesto for what was increasingly becoming called autofiction. It's a blend of quotation and argument in 618 numbered sections, grouped by twenty-six categories.


I love literature, but not because I love stories per se--this is where we begin to differ--, and I find all the moves the traditional novel makes unbelievably predictable, tired, contrived, and essentially purposeless. I can never remember characters' names--for me I remember characters' names much better than acquaintances, though I sometimes wish it weren't true--, plot developments, lines of dialogue, details of setting--and to all of that I can only say, I'm sorry for you, David Shields--. I'm drawn to literature as a form of thinking, consciousness, wisdom-seeking.--I'm reminded of Peter Beagle's introduction to the edition of The Lord Of The Rings I grew up with: "escape stopped being comically obscene." But escape as a reason to read is clearly not on David Shields' list--I like work that's focused not only page by page but line by line on what the writer really cares about rather than hoping that what the writer cares about will somehow mysteriously creep through the cracks of narrative which is the way to experience most stories and novels.--It is precisely those novels where the writer tells you line by line what's most on her (or more likely his) mind that are most likely to bore me. Wisdom is only dug out of the cracks.--

To Shields' credit, he'd probably appreciate being argued with interlinearly, and it's to the book's credit that I continue to want to do so.

Here's what I wrote about it in my books journal the first time I read it:

"Shields strikes me as fundamentally uninterested in what novels can do. 'A deeper journey into the self.' Ick. In any case what he's looking for is an enchiridion, a philosophy of how to live life. That's all well and good, I suppose, but not the sum total of the novel. The novel does not do a very good job of being Epicurus. It doesn't teach you how to live. It's very much more useless than that." 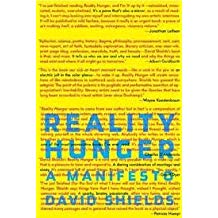 I was originally not going to count library books for my rereading challenge, but now I think why not? Though I do feel a need to give some renewed love to the many and various books already around the house. This is likely to be the only one in any case.

Happy Canada Day! It's hot here and a good day sit in an air-conditioned room and bang out one of the posts I've been needing to do...
Posted by reese at 5:10 PM