Everyone had a friend in every wisp of cloud
that's how it is with friends where the world is full of fear
even my mother said, that's how it is
friends are out of the question
think of more serious things. 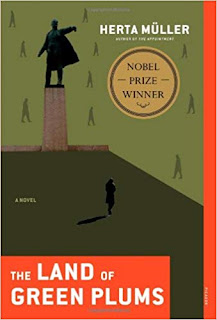 This poem, or part of a poem,--I'm uncertain--serves as the epigraph to Müller's novel, but it is also quoted by the narrator and her friends at several points in the novel. Müller's novel is a story of friends in a world of fear.

Herta Müller was born in Nicolae Ceaușescu's Romania in 1953, which was certainly a world of fear. To compound problems, she was part of the German-speaking minority. She got herself in trouble with Romania's secret police, the Securitate, was mostly unable to publish, and was turfed out of her job as a technical translator. She got out to Germany in 1987. This novel appeared there in 1993, and was translated by Michael Hofmann into English in 1996.

My edition includes the speech she gave for her 2009 win of the Nobel Prize in Literature; the novel follows, it seems, pretty closely the events of her life. The narrator, too, gets out, but her friends are not necessarily so lucky. I thought it was a fairly effective presentation of a quite dark, but important story.

The prose is curiously flat. Here's an example, chosen more or less at random:

Between winter and spring I heard about five corpses that got snagged on reeds in the river outside the city. Everybody talked about them, as if they were talking about the dictator's illnesses. They shook their heads and shuddered. Kurt, too.

Michael Hofmann is a major translator, and I assume this represents the German accurately. I didn't go check, not that my German is good enough to do so. But it does feel right: something stylistically more elaborate might very well not be suitable for the subject. The narrator and the other characters are from small-town Romania; they're bright and want to get an education and move to the city, dangerous as that may be, but they are not initially sophisticated. They come across some contraband German books from Germany:


The books in the summerhouse had been smuggled into the country. They were written in German, our mother tongue, the one in which the wind lay down. Not the official language of the country. But not quite the children's bedtime language of the village either. The books were in our mother tongue, but the silence of the villages, which forbids thought, wasn't in them. We imagined the land where the books came from as a land of thinkers.

Her book brings back into German the silence of the villages.

It's the only Herta Müller I've read, so I can't compare, but I would read another. It may be a while, though. I'm not sure I can bear to read about life under maniacal fascist dictators very much just at the moment.