Elizabeth Taylor's A Game Of Hide And Seek

"And don't we love forever the one we didn't marry?" 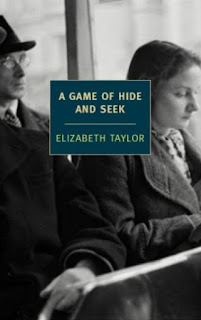 A Game Of Hide And Seek (1951) is the story of Harriet and Vesey. They fall in love one summer in the 1920s when they're eighteen. Harriet is living in the country with her widowed mother, and the neglected Vesey comes to stay with his aunt, who is Harriet's mother's best friend. But they're both eighteen, too young, and both socially maladroit in different ways--Harriet shy and stammering, and Vesey irritable and proud of his emotional pain--and when it's time for Vesey to return to London and his parents, nothing really has happened between them, and not very much has even been said.

And that's the first half of the novel.

The second half is mostly set twenty years later, with some flashes back and forwards as well. Harriet is married to Charles, a dozen years older than her, and has a daughter Betsy; Vesey has gone on the stage, not very successfully, and has been disinherited by his well-to-do father for that rebellion. But he scrapes by. Playing Laertes in a touring company doing Hamlet in the provinces, he pitches up where Harriet is living. Charles, jealous, though trying not to show it, suggests Harriet and Betsy go see the play. Harriet and Vesey begin to see each other socially, while the theater company is still in the neighborhood.

It's still not clear that very much happens between them.

Harriet's friend Kitty suspects something and wonders to Harriet the question I began with, and it is the question of the novel in a way; though one can also ask would Harriet or Vesey have been trying to capture the supposed magic of that past summer if they were happier in the present? And, in fact, is that even what they're doing? They're not sure themselves. It ends surprisingly, but satisfactorily.

Taylor's novel very subtly portrays the relationship with its ramifications. I thought it was very convincing. The prose is a bit odd, though. Here's an example:


She could see herself in the filmed mirror; anxious; tense; her hands clasping her elbows tightly; her shoulders hunched up."

Now I'm not of the anti-semi-colon party, as will be clear enough from my blog, but that might be bit much even for me. And it wouldn't be difficult to find other examples. Sure, the sentence is clear enough, but perhaps just a wee bit extreme? Well, be that as it may, the novel works.