There was a side of Sloan, she had decided, that she mistrusted, a side that could be summed up by saying he was a Republican. 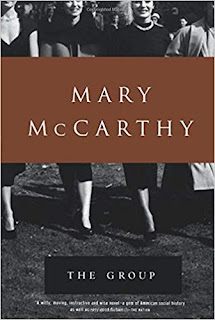 Anywho, Mary McCarthy's The Group is the story of eight Vassar graduates from the class of 1933. Which was also the year that Mary McCarthy graduated from Vassar. The novel was shocking when it came out in 1963 with its frank discussion of female orgasm, birth control, and Lesbianism, and it got banned in a bunch of places. It was also an enormous bestseller that went on to be made into a popular movie.

It is often a funny book, but it's not a Funny Book; McCarthy was famously, savagely witty, but things can be dark for her characters, and not just because one's husband is Republican. It ends, in 1941, with a final reunion of the group in tragic circumstances, and with war looming.

With its shock value long gone, the most innovative thing now about the book is its narrative style. McCarthy often speaks in the voice of the group, even about a single member of the group. Here's an example of what I mean:


Yet Helena was intelligent, the group discovered, and in some ways very mature for her age. She had read a tremendous lot, particularly in modern literature, and listened to modern music, which went over most of the group's heads; she collected limited editions of verse and rare phonograph records of pre-polyphonic church music. The group considered her quite an asset, almost a little mascot, in her neat Shetland sweater and skirt, riding across campus on her bicycle or chasing butterflies with a net in the Shakespeare Garden.

But Helena is a member of the group! And other members get this same treatment. I find it quite a successful approach: it gives the reader an outside view of the character while at the same time conveying (amusingly) the basic prejudices of a bunch of recent Vassar graduates. It's a knife that cuts both ways.

I wrote a paragraph comparing Lessing's The Golden Notebook and The Group, but I couldn't quite convince myself, so I've deleted it. Still I think there's something there, about the way both novels were read as titillating tracts, but had more literary substance than that. Lessing's is, however, the greater novel; The Group more peters out than ends despite McCarthy's attempt to supply a bang-up finish.

Lots of fun information about the book here.

It's counting as my monthly motif summer read. What is a summer read for a retired person? My Saturdays are much like my Tuesdays, and the seasons, too. But we do have a cabin in the north where there is no Internet and I take long TBR books so I can read them without distraction. At about 400 pages, The Group isn't all that long, and I still have some monsters I hope to read at the cabin later this summer. But it will do, and did do, very nicely, for a summer read. When I could take my eyes away from the view: