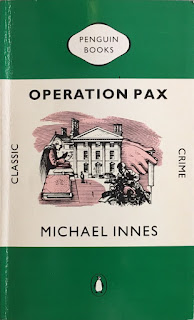 Stayed up a little too late to finish this, which is always a good sign in a book...

Operation Pax (1951) is definitely more adventure than murder mystery. This a suspense thriller that definitely does involve car chases. Without too much violence to the concept it could have served as a James Bond plot. Though there are some amusing bits of  Oxford parody.

It starts with Albert Routh, a small-time con man, funking on his current con and then stumbling into something that's much bigger than anything he's seen before. It both frightens him and gives him dreams of grandeur. The really bad guys are now out to kill him, but by bluffing and with a bit of luck, he escapes, and with a crucial piece of paper. But the baddies are close behind. Routh gets to Oxford before they catch up with him.

Sir John Appleby is in Oxford, investigating the disappearance of his sister's fiancé. He comes across the terrified Routh and has him for twelve hours before losing him again. But Appleby has learned something and suspects that the two cases are connected.

And, well, of course they are.

So Appleby is now on the hunt for Routh and the really bad guys. But so are a whole bunch of other people, including his sister Jane Appleby, Lord (?) Roger Remnant, an Oxford dropout and taxi driver, and the Tigers, a children's club. (The children's club would have been dropped for the James Bond version.)

Anywho, it kept me turning the pages. The plot depends a little too much on coinkydinks, and don't think for more than thirty seconds--you're not really invited to--about the science. The reveal of who the biggest bad guy at the end was a surprise, but not an especially convincing one. Doesn't matter. It was fun.


"When this possibility came to me I made inquiries about Milton Manor. It is not for children but for adults--a large, private Kurort or Klinikum. I do not know the word--"
"We used to say nursing-home or sanatorium. But we have started saying clinic too."


Vintage Mystery Challenge. Gold.  Where. Set in a hospital/nursing home.
Posted by reese at 2:14 PM