Erle Stanley Gardner's The Case Of The Haunted Husband

"There's nothing the matter with you that four good cocktails won't cure." 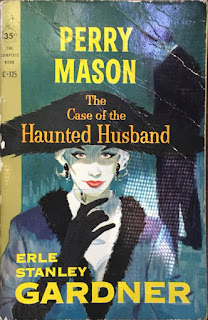 That's Della's advice to Paul Drake. It might be a bit much for me, though. I probably wouldn't get past the second.

Until the very end I thought Haunted Husband was one of the best Perry Mason outings. It's from 1941, in the middle of a good period for Gardner's Perry Mason novels, and was free of the sloppiness he's capable of. The blonde client ends up in Mason's office at first for vehicular manslaughter; she was supposedly drunk and behind the wheel in a four car pile up outside Bakersfield. But she's innocent of that, of course.

The blonde has an uncle and a fiancée of sorts--she's hitchhiking to get away from him--and they're both quite amusing; the fiancée a wimp and the uncle a busybody. There's an amusing satire of a Hollywood artiste as he writes the script for his next blockbuster. And it includes Perry's usual shenanigans in finding a body.

Up until the very end, though, as I said. I read the last twenty pages three times and I still can't tell you exactly what happened. Perry explains it to Lt. Tragg but that's because he wants Tragg to act in one way and when Della asks Perry if his explanation to Tragg was accurate, he says mostly, but then changes a few things. Who was married to whom and who wanted to be married to whom is still up in the air for me. It may be OK to wonder who it was that really shot the chauffeur if you're Raymond Chandler; I expect Gardner to be a little less impressionistic.

Vintage Mystery Challenge. Gold. What. Alliterative title.
Posted by reese at 12:06 AM