Erle Stanley Gardner's The Case Of The Spurious Spinster 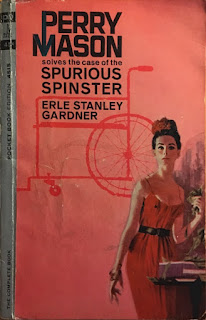 The Case Of The Spurious Spinster (1961) finds Perry Mason in good form. It's Sue Fisher, the well-dressed brunette of the cover, who goes to Perry Mason. She's an executive secretary, working on a Saturday and the son of her manager and the boy's governess come to the office. The son hands her a shoebox of hundred-dollar bills, supposedly from his father. She puts the money in the safe, goes to the airport to pick up the company's owner, and then goes straight to Perry Mason. Which turns out to be very astute of her. I would have thought, odd as it was, with the money in the safe everything would be fine. Well, of course, it wasn't.

Amelia Corning, the owner of Corning Mining, Smelting and Investment, lives in South America and is confined to a wheelchair; it's her who arrives at the airport. She then disappears that evening. Then a second, different Amelia Corning arrives the next day, and then she disappears, too. One of them was spurious, but which?

Ken Lowry, the manager of one of the Corning mines, is found murdered, by Perry, of course; shortly after that, Sue Fisher is arrested for the crime. It's clear that there's some sort of fraud going on, but who's behind it? The manager is the likeliest candidate, but it could be Sue Fisher, and she's arrested for the murder.

The formula requires a good-looking young woman who goes to Perry Mason for something else (check) and is promptly accused of murder (check). It has to be Perry who discovers the body (check). It also requires Perry finding some key bit of evidence, then obfuscating his trail in a way that brushes with legality. That part of the formula was very successfully done in this, and I thought the best part. No spoilers! Then Hamilton Burger has to blow his top, and that was very well done, too.

It will be no surprise that the murderer was not Sue Fisher, but the final resolution was cleverly tricky and was revealed in court (check).

All in all, a good, if not brilliant, Perry Mason story.