"What is the writer's struggle except a struggle to use a medium as precisely as possible, but knowing fully its basic imprecision? A hopeless task but none the less rewarding for being hopeless." 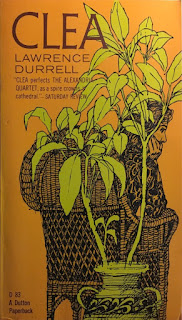 So says one of the many writers in Durrell's Alexandria Quartet. A message for us all, bloggers included? Or just more writerly talk, undercut by the situational irony of the series? The speaker (John Keats, well not that John Keats) is unloved in the earlier volumes; Darley, the most obvious stand-in for Durrell, is trying desperately to get him to not write a tell-all biography about Pursewarden, another writer; and now, Keats tells us this, as he prepares to write his masterpiece, only to die with it entirely unwritten and even unstarted, fighting the Afrika Korps in the Egyptian desert.

Ah, well, whatever it is: a message of wisdom or the ironic imitation thereof. You can decide. I've been struggling to write this post, as precisely as possible, but it has seemed hopeless. I'm just going to have to deal with the imprecision of my thoughts and get it done.

A few things have occurred to me, though, in rereading the series, and at the same time reading MacNiven's biography of Lawrence Durrell:

1.) The important one. Durrell's name is to be pronounced as if it rhymes with squirrel. Who knew? Also he was Larry to everyone who knew him, and MacNiven's biography constantly refers to him as Larry. Larry Durl is definitely not the same person as Lawrence DurRELL. But now you know: he's a Larry.

2.) The series was often read as a roman à clef; it seems Larry resisted that. After the biography, I can both see why, and see why he resisted. Larry, who was--ahem!--a bit of a horndog, lost one wife in Alexandria when she left him, met a second one there whom he was losing as he started the quartet, and then acquired a third who saw him through the quartet. That third wife also had connections to Alexandria: her father was French, but her mother was from a wealthy Alexandrian banking family. In the novels, Darley starts with Melissa, a not very good cabaret dancer, moves on to Justine, an Alexandrian Jew with a complicated sexual history; and ends up with Clea, an artist in her own right. Eve Cohen, the second wife, was an Alexandrian Jew with a possibly complicated sexual history, and Claude-Marie Vincendon, the third wife, was a novelist in her own right. (Nancy Durrell, née Myers, the first wife, was, from the photograph in the MacNiven biography, an attractive, though perhaps prim, Englishwoman. She apparently had painterly aspirations. Her transmutation into a Greek exotic dancer seems the biggest stretch.)

3.) That explains a bit why it was thought of as a roman à clef; here's why it was not: Larry was in Alexandria only during World War II. He escaped to there when the Nazis took Greece; the main events of the quartet take place in the thirties, and only Clea, the last novel, takes place during the war. But the whole psychology of the novel is not wartime, nor is it really Alexandria. It exists in a world where people spend all of their time talking about art; it also exists in a world of sexual license. MacNiven the biographer suggests that the sexual license reflects the war years, when Larry was actually in Alexandria, rather than the 30s, when he sets the novels; rather I would suggest the novels suggest the 30s, when Larry and his wife, Nancy Durrell, were in Paris, hanging out with Henry Miller and Anais Nin and no doubt drinking heavily and talking about art and Freud and D. H. Lawrence. With that crowd, there was probably some sexual license, too. It's only the trappings that are Alexandrian.

4.) But that does a disservice to those trappings; they're half the charm of the quartet; Larry was also a very good travel writer, and the description of place is a good part of why we turn to the Alexandria Quartet. According to MacNiven, Larry thought about setting his quartet idea in Athens before deciding to set it in Alexandria. But it could only be in Alexandria, or a place like Alexandria, steeped in history, and with a meeting of cultures and religions. Larry was born in India, and lived there the first fifteen years of his life. His family, for Anglo-Indians, were apparently unusually comfortable in associating with Indians. I think there was something in India, its multi-ethnic, multi-religious society that stuck with Larry, that seemed to him to simply right. It's like that in his Alexandria: main characters are heterosexual, homosexual, and bisexual; they're Christian, Protestant and Coptic, Muslim, Jewish (many with a persistent interest in Gnosticism); they're Arab, Greek, English, French, probably some others I'm not thinking about at the moment. Alexandria isn't like that anymore, even if it was, really, then. That doesn't matter. Larry needed a place like that, and wanted a place like that, created a place like that, and I at least think it's admirable he did.

I had some other quotes I'd copied out, but this post is probably long enough. There are things to dislike about the quartet: the prose, you either like it or you don't, and if you don't,  I can't really defend it; his attitude towards women and sexuality: Justine had been raped as a child, it's a major plot point, and at one point Pursewarden tells her to get over it, and she does. I wish I could say I thought Larry meant that ironically, but I doubt he did.

But mostly, I think, there are things to like about the quartet. This is my second time through it, and I liked it as much the second time as the first.