"...true literature can exist only where it is created, not by diligent and trustworthy officials, but by madmen, hermits, heretics, dreamers, rebels, and skeptics..." 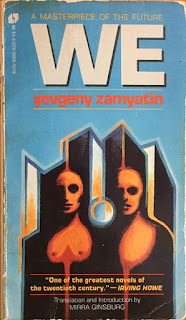 With an attitude like that, it's no wonder that Zamyatin was unable to publish his novel We in the Soviet Union. The quote dates from an essay of Zamyatin's in 1921, around the time he was writing We, and is given in the introduction to my edition. (tr. by Mirra Ginsburg.)

The novel is set in a futuristic world; the characters have only a letter and a number for their name; it's told in a series of diary entries by D-503, a mathematician and the first 'Builder' working on a spaceship, which will carry their society to the stars. That society is horrific, though D-503 doesn't see it: totalitarian, with a great Benefactor who murders opposition; lives, even to the extent of emotions, love and will, subject to the One State; a secret police and a culture of self-impeachment. D-503 comes into contact with the resistance in the person of the beautiful I-330. He falls in love with her, without understanding why she's interested in him, though at least initially it's for his usefulness as the first 'Builder' on the great state project.

I thought the novel was very good.

The conflict is between that totalitarian state and the resistance; there is actual physical conflict; that conflict is reflected in the understanding of D-503. How it's resolved you'll have to read to find out. (And I recommend you do!)

A couple of things: If I were looking for an example novel with an unreliable narrator, right now this is what I'd pick. It's brilliantly well-done. It's not that D-503 is a liar; it's that he doesn't see. But at the same time, he's a smart man and is capable of observation. We might say now he was on the autistic spectrum. We see so much more than he does, and yet without him we couldn't.

And then there's Zamyatin's vision of totalitarianism. It's astonishingly prescient. He's writing this in 1920 and 1921 according to the introduction. Lenin isn't dead; Stalin is not yet in control; the Russian Civil War isn't even over. There's not that much state control; there's barely even a state when he's writing. He builds it up out of Dostoevsky,  (Notes From The Underground, mostly, I'd say), ideas about the Spanish Inquisition, Taylor and Bentham, and early hints of what was to come in the totalitarian future. It's hard to see how it wasn't written from experience in 1937, but it wasn't.

And if I had one of those features "If you liked..." this would definitely trigger Orwell's 1984. I 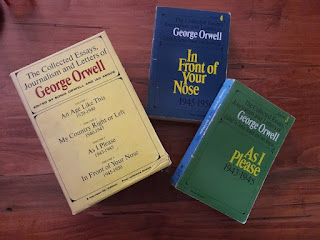 looked him up in my collected Orwell non-fiction. Zamyatin appears in the index several times. Orwell wrote a review of a French translation of We in January of 1946; he said he was unable to find the English translation. He compared it to Huxley's Brave New World, not being entirely favorable to either novel. (Well, Orwell wasn't the sort of guy to rave about anything, perhaps especially things he liked.) Later he was involved in getting it issued in the UK in an English translation. But most interesting was a quote from a letter to the Russian scholar Gleb Struve in February of 1944: [Struve's book Twenty-Five Years of Soviet Russian Literature] '...has aroused my interest in Zamyatin's We, which I had not heard of before. I am interested in that kind of book, and even keep making notes for one myself that may get written sooner or later." Well, that book did get written, and We definitely influenced it.

Read for all sorts of good reasons, one of them being my Classics Club challenge. But not for that cover. Seriously? Ick.