Edmund Wilson's The Scrolls From the Dead Sea (#NovNov)

"At some point rather early in the spring of 1947, a Bedouin boy called Muhammed the Wolf was minding some goats near a cliff on the western shore of the Dead Sea. Climbing up after one that had strayed, he noticed a cave that he had not seen before, and he idly threw a stone into it. There was an unfamiliar sound of breakage...he later came back with another boy, and together they explored the cave...[He] found long manuscripts, inscribed in parallel columns on thin sheets that had been sewn together. Though these manuscripts had faded and crumbled in places, they were in general remarkably clear." 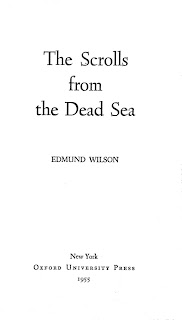 That's the opening of Edmund Wilson's The Scrolls from the Dead Sea.

Those scrolls Muhammed the Wolf discovered were the first of the Dead Sea scrolls, ancient documents that would upend the understanding of the gospels, of Christianity and Judaism both. Though not everyone agreed at first, or even for a long while--likely there are some doubters even now--they were written in the first two centuries preceding the Christian era.

Muhammed the Wolf and his fellow Bedouins were not scholars but they had the sense that they had gotten hold of something that might be of interest. Or at least, of value, and they let it be known they had scrolls for sale. Eventually Mor Samuel, the Metropolitan of the Syriac Orthodox church in Jerusalem purchased the scrolls then available on the market. Even he didn't entirely know what he'd just bought, but he knew they were written in Hebrew, a language he didn't know.

1947 was an 'interesting' time in the old Palestine mandate. The Brits were about to give up and run away, and Jews and Muslims were jockeying--frequently violently--for a better position in what would be the new order. (I am making a great effort to not come down on one side or the other here. 😉) Bedouin goatherders who were accustomed to roaming according to the needs of their goats were now subject to borders and armed checkpoints.

It took a while for the manuscripts to make their way to appropriate scholars and not all of them ended up with Mor Samuel. It was a dramatic and important story and in 1954, Edmund Wilson persuaded the New Yorker to send him to Israel to report on it. He filed a series of articles for the New Yorker starting in May, and later that year a book, composed out of those articles, came out.

He discusses the discovery of the scrolls, the people involved in the discovery, the Essene order (a Jewish monastic order from the time around Christ who were responsible for the preservation of the scrolls), and historical figures, such as the Teacher of Righteousness. Ernest Renan, the 19th century French author of Vie de Jésus appears.  Wilson also went to visit the caves at Qumran and writes about his visit.

Edmund Wilson was not a scholar, but he was a literary journalist of a very high order and at this point in his career he'd acquired a little Hebrew. In the 30s he'd been a Marxist, and after he turned against communism, he decided that one of the things Marxism had done for him was to supply a religious feeling he'd been lacking. He didn't ever become a believer, but he was interested in the things believers were interested in, and in any case, the Dead Sea Scrolls were big news.

There are probably better introductions to the subject now and discoveries have been made since--even Edmund Wilson wrote a second edition later, but I was only able to get hold of the first--but this is still a pretty good read, in the way of the New Yorker. And it's a non-fiction book of 121 pages, so it's particularly seasonal... 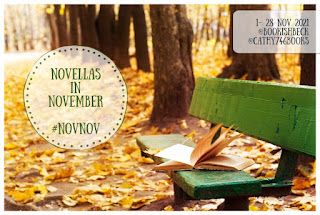