Some clerihews by E. Clerihew! 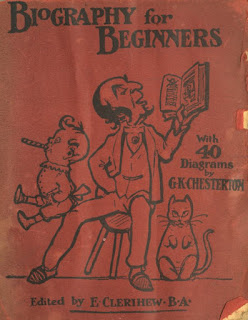 Sir Christopher Wren
Said, "I am going to dine with some men.
If anybody calls
Say I'm designing St. Paul's"
-o-
The younger Van Eyck
Was christened Jan, and not Mike.
The thought of this curious mistake
Often kept him awake.
-o-
The intrepid Ricardo
With characteristic bravado
Alluded openly to Rent
Wherever he went.
-o-
Professor Dewar
Is a better man than you are.
None of you asses
Can condense gases.
-o-
John Stuart Mill
By a mighty effort of will
Overcame his natural bonhomie
And wrote "Principles of Political Economy"

Until recently the only clerihews by E. C. Bentley I had read were ones found in various anthologies of light verse. Auden, who clearly likes them, has a bunch in his Oxford Book of Light Verse, for instance. But then I thought about the dates and realized that the first of his three books of clerihews, Biography for Beginners, might be available at Project Gutenberg. And so it was! And with illustrations by G. K. Chesterton. (Whom I didn't know could draw, but clearly can...)
I had to look up James Dewar, but he invented the vacuum flask.
Note: the index to Biography for Beginners is pretty hilarious, too. I don't know why Bentley has it in for Christopher Wren, but he clearly does.
Via Carol I came across this useful introduction to the form.
Turns out clerihews are even more catching than I realized!
The idea of publishing poem posts on Thursday originates with Jennifer at Holds Upon Happiness. Brona has some great animal prayer poems in an inadvertent teaser 😉 for Rumer Godden reading week.
Posted by reese at 12:38 PM