Willa Cather's One of Ours

"Why was everything so mysteriously hard?...The world was too rough a place to get about in." 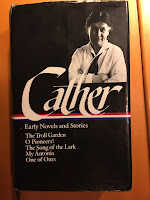 That's Claude Wheeler, the protagonist of Willa Cather's One of Ours, her novel of 1922. Claude is the middle child of three boys raised on a Nebraska farm. Sometimes his name is pronounced 'Clod', but he isn't: he's good on the farm, handier than his older brother Bayliss who now keeps a shop in town, more responsible than his flighty younger brother Ralph, who's always futzing with cars. But Claude is intelligent and sensitive, qualities that don't do him much good on the Nebraska plains.
He yearns for something more. He goes to Lincoln for college, but to a religious school. He finds the instructors second-rate and would prefer to go to the state university, but his mother, who's pretty churchy, won't approve. His father doesn't much see the point of college at all.
His father buys a cattle-ranch in Colorado and takes the younger brother off to run that, so Claude has to give up university and look after the home farm. He undertakes successful innovations, marries the miller's daughter Enid Royce, builds his dream house for the two of them, but none of those things turn out to be what he was yearning for.
The WASPs in Nebraska are full of feeling but unable to express it; this includes Claude, but isn't limited to him. His future father-in-law Mr. Royce tells Claude, "Enid is a vegetarian, you know," and Claude dismisses that as irrelevant, and so maybe it is, but, while Mr. Royce likes both parties, he worries that the marriage won't work:

"He [Mr. Royce] found himself unable to touch upon the vast body of experience he wished to communicate to Claude."

The German-Americans are more open and expressive and Claude is drawn to them, but can't quite be comfortable as part of their circle.
Prohibition comes to Nebraska over the course of the novel, and ahead of the rest of the country. Claude doesn't himself seem to drink, but since he's friends with various German immigrants, he doesn't object when they do. His wife Enid canvasses for the Prohibition cause. Theirs is not the only mixed marriage: generally it's the men who don't mind drinking, and the wives who object, but Bayliss is a staunch Prohibitionist. At Claude's wedding, his father and his father-in-law go off for a quick bourbon together, and when they come back,

"...the preacher smelled the tang of spirits and felt slighted. He looked disconsolately into his ruddy goblet and thought about the marriage at Cana. He tried to apply his Bible literally to life and, though he didn't dare breathe it aloud in these days, he could never see why he was better than his Lord."

The other great political event is the approach of World War I:

"The German army was in Luxembourg; he didn't know where Luxembourg was, whether it was a city or a country; he seemed to have some vague idea it was a palace!"

(Of course, it is actually all three, though the Palais is in Paris.)

It will be World War I that provides the something more that Claude is yearning for.

When the novel came out, it had good sales and won Cather the Pulitzer Prize, but the reviews were fairly mixed. (I'm mostly getting this information from the Wikipedia article, though I also read Edmund Wilson's negative, but not very well-informed, review from The Shores of Light.) The general poop seemed to be that the war scenes weren't very good, and my feeling is the general poop was kind of right. (Though what do I know of war?) Sinclair Lewis' remarks seem accurate to me, "truth does guide the first part of the book," the Nebraska part, but in the second part Cather used "all the commonplaces of ordinary war novels."

Pretty true. But I would add that the Nebraska part is about 2/3rds of the novel, and is easily the equal of Cather at her best. That part shouldn't be missed.  Then comes the troop ship over, which is afflicted by an early appearance of the Spanish flu, making it--unexpectedly to me at least--a pandemic novel, and was quite convincing. It's only when the novel reaches France--and is close to done--that it gets weaker.

By 1922, when this came out, American opinion had turned pretty strongly against the war. Cather acknowledges this in the person of David Gerhardt, a professional violinist turned soldier. Was this war going make the world safe for Democracy?

"You don't believe we are going to get out of this war what we went in for, do you?"

But Claude does go on believing, and he's the protagonist; that may have been a bit intolerable to elite opinion by 1922.

Cather's primary source material for the war parts were letters home written by her cousin Grosvenor Cather. I suspect this may also have colored her approach. A soldier writing home can admit fear, can admit (though maybe downplay) danger, but it's much harder to admit despair and purposelessness. Maybe he should have. But Claude doesn't.

In a fascinating letter about the book, Cather writes to her friend, Dorothy Canfield Fisher, the educator and novelist, "Yes, it will be classed as a 'war story',...and God knows I never wanted to write a war story...It's a misfortune for me and my publisher that anything so cruelly personal, so subjective, as this story, should be mixed up with journalism and public events with which the world is weary and of which I know so little." To call it a 'misfortune' is considerably overstating the case, but it is best thought of as the story of Grosvenor Cather/Claude and not a war story.

She goes on, "I tried to keep the French part vague, seen from a distance, and only what he sees."

Anyway, a very good novel, I thought, even if not Cather's best.

My spin book this month is The Song of the Lark by Cather, and this was just a warmup! 😉