Sunday Salon, starting off in 2023

My first book of the new year was the recently released biography of Shirley Hazzard by Brigitta Olubas, an Australian professor. A very good start to the year. It made best biography of 2022 on at least one list. 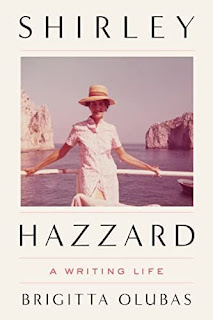 It's likely to start me off on a Shirley Hazzard bender, and in fact I'm halfway through rereading The Transit of Venus, her masterpiece.
Also last week I read Boris Dralyuk's My Hollywood and other poems. There's some pretty fun stuff in it.
Challenges
It's the time of year for wrapping up old challenges and signing up for new ones. (And maybe starting doing Sunday Salon blog posts again on a regular basis?) I've done the European Reading Challenge hosted by Gilion at Rose City Reader for years, and signed up again. I've also decided to return to Bev's Vintage Mysteries challenge after not doing it for a couple of years. They're both fun ones & I recommend them.
On the Stack 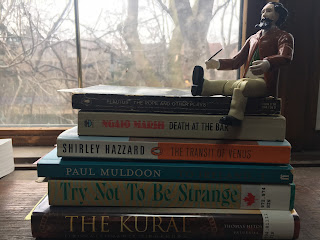 Our host Chuck is demonstrating:
Plautus/The Rope and Other Plays (January readalong here)
Ngaio Marsh/Death at the Bar (first mystery of the year!)
Shirley Hazzard/The Transit of Venus (that one has the most progress in it)
Michael Hingston/Try Not To Be Strange (the kingdom of Redonda)
Paul Muldoon/To Ireland, I (could be thinking about travel...)
The Kural (tr. Thomas Pruiksma) (Tamil wisdom poetry)
The race is on. Which will get finished first?
On the Table
As a Chicago native no longer living there, I can't do without deep dish pizza. So I learned to make my own. Saturday night's dinner:
How was your week?
Posted by reese at 4:59 PM