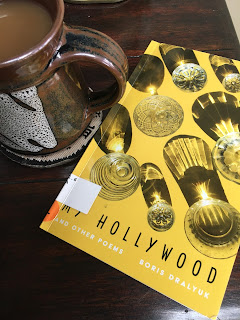 No breakout leads--a prisoner of reruns
on local stations high up the dial:
a stray recurring role, a guest appearance
on Perry Mason. Later, Rockford Files.
Her second act? Pure dullsville in Van Nuys.
Chablis with ice. A Chevy dealership
gone belly up. Her paunchy husband's lies:
a broken marriage. Then a broken hip.
None of that matters, if you ever catch her
singing, "How High the Moon"--silvery, misty--
on that one show...She isn't any match for
the stainless Julie London or June Christy,
but through her gauzy voice, as through a sieve,
spare notes of heaven reach you from afar.
For those two minutes, she'll make you believe:
Somewhere there's music. It's where you are.

-Boris Dralyuk
I find this quite tender. As far as I know it's not any actress in particular, but it's utterly convincing of somebody who went to Hollywood, had higher aspirations, but who only had the one moment.
Boris Dralyuk was born in Odesa (I guess I'm transliterating the Ukrainian these days instead of the Russian) in 1982, but emigrated with his family to L.A. in 1991. He's mostly known as a translator from the Russian (Tolstoy, Babel, Pushkin, Kurkov) but his first book of poetry My Hollywood and Other Poems came out last year. I found it very good.
In fact so good that I thought I'd type out some poems before I need to return the book to the library and then I'd have them available for memorization. So I was typing it anyway. But it's also Thursday. It's a poem. Does that have any implications for the future? I don't know. Maybe.
Somewhere there's music. It's where you are.
Posted by reese at 11:53 AM