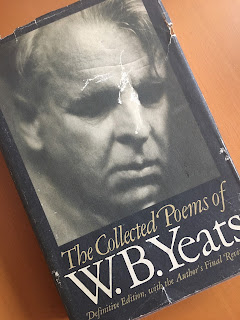 'In our time the destiny of man presents its meaning in political terms.'
-Thomas Mann

How can I, that girl standing there,
My attention fix
On Roman or on Russian
Or on Spanish politics?
Yet here's a travelled man that knows
What he talks about,
And there's a politician
That has read and thought,
And maybe what they say is true
Of war and war's alarms,
But O that I was young again
And held her in my arms!

-W. B. Yeats
In case you didn't guess 😉 this is from the 1930s, late in Yeats' career, and shows up in Last Poems. I assume we're meant to identify the 'travelled man' as Mann, then living in exile. While there aren't so many politicians who have both 'read and thought,' I have no idea who, if anybody in particular, that's meant to be.
I'm still dodging writing about Shirley Hazzard's The Transit of Venus. Quoting a poem that Hazzard has a character quote in the book is a trick I pulled before, and here am I doing it again. Christian Thrale, who's in the British foreign service, remembers the first four lines as he's about to embark on an affair with his secretary. She does end up in his arms. His wife is Grace Thrale (née Bell), one of the two sisters at the heart of the book. 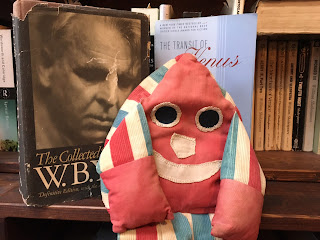