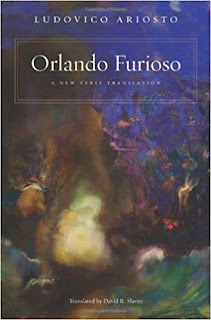 Orlando Furioso (Crazy Orlando) is one of those sequels more famous than its precursor. Matteo Maria Boiardo wrote a poem Orlando Innamorato (Orlando In Love) which was published, unfinished, after his death in 1495. Ariosto said I've got to finish that, and so he did, publishing his final version in 1532.

The simple part of the story is this: Orlando, the top knight in Charlemagne's court, falls in love with the beautiful pagan Angelica. She mostly dodges him, but for a long time doesn't tell him no definitively. But when she meets Medoro, who needs her for more than her beauty, she falls in love with Medoro; Orlando goes nuts when he finds out--not wearing any clothes and wandering the countryside.

But that's just one thread in this monumental work, which can't be easily summarized. There's also the love of Ruggiero and Bradamante, the mythical ancestors of the house of Este, dukes of Ferrara, Ariosto's patrons. There's war between Islam and Christianity, with the Muslim army on the verge of sacking Paris. (Hmm, not very historical, that.) And there's magical armor, lances, and swords. For you Quixote readers out there, the actual helmet of Mambrino makes an appearance. There's even a hippogriff, that various people fly around on, including the English knight Astolfo, who heads up to the moon to get the cure for Orlando's insanity. So, you know, stuff happens. 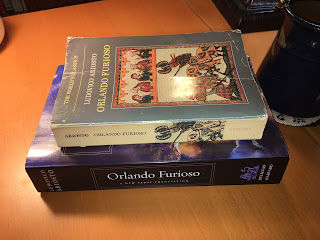 I was reading it in David R. Slavitt's verse translation, published by Harvard. I'd read it before in the prose translation of Guido Waldman. You need to know that the Slavitt translation published by Harvard is incomplete, with only a little over half included. Slavitt is discreet about this in his introduction, but apparently it wasn't his idea to publish only a partial version. The economics were such Harvard was unwilling to publish the whole as a two volume book. (A little over half is still 650 pages.) The rest of Slavitt's version came out eventually as Lacunae with a lesser-known press. I haven't read it.

I've liked other Slavitt translations I've read--he does a nice job with the obscure Latin poet Ausonius for instance--and when I saw he'd done Ariosto I thought I'd have to read it. And it reads well. It seems to demand the word brio; in any case Michael Dirda uses it in a review that gets blurbed on my paperback edition. Ariosto writes in ottava rima, the eight line stanza of iambic pentameter that rhymes ABABABCC, a meter that's trickier in English than it is in Italian. That's two triple rhymes per stanza. The most famous poem in English in this meter is Byron's Don Juan (deeply influenced by Orlando Furioso) and it opens like this:


I want a hero: an uncommon want,
When every year and month sends forth a new one,
Till, after cloying the gazettes with cant,
The age discovers he is not the true one;
Of such as these I should not care to vaunt,
I'll therefore take our ancient friend Don Juan--
We all have seen him, in the pantomime,
Sent to the devil somewhat ere his time.

You see that the triple rhyme allows some comic possibilities. (And yes, I'm quite sure Byron knows that Juan is not supposed to rhyme with true one.)

So in comparison how does Slavitt handle the verse form? (And yes, I'm comparing him to Byron. That is a high standard. He merits that.) Here's a couple of stanzas I picked out:

This is the very net that Vulcan made
of finest threads of steel, and with such art
that no one could untangle any braid
or pick the knots that held it together apart.
This is the one in which Venus and Mars laid.
(Lay, surely? No, no. One another! Start
paying attention. It's transitive. Use your head.)
But this is the net that caught those two in bed.

Women have achieved in every art
and craft the highest distinction, and their fame
is great indeed. They're strong and they are smart.
Without them history couldn't have been the same.
I rather think it is envy on man's part
that keeps concealed the honor and acclaim
they have deserved. If their work is not taught in schools
it is because men are jealous--or are fools.

Here's a couple of things I'd note: Slavitt allows more substitutions in the meter than does Byron. Well, he is a couple of centuries later and free verse has happened. 'But this is the net that caught those two in bed.' It's an anapaest for an iamb in that second foot. I guess that's fine by me. The scansion of the previous line in that stanza is even trickier.

There's also a lot more enjambment: "Start/paying attention," "fame/is great indeed." I'm less certain about this. That sort of thing really de-emphasizes the rhyme and, for me, makes it feel just a bit prosaic, especially used as often as Slavitt does.

Another minor grouse is that Slavitt continues to use the Italian version of everybody's name. Well, it wouldn't feel right to change Orlando back to Roland. But that so many names end in 'o' means he has to rhyme on them a little too often. Ruggiero could be Roger. Once or twice a triple rhyme like "hero/Ruggiero/hear: 'O!'" is amusing. That exclamatory 'O!' ends a lot of lines. There are perhaps too many of them because too many of them are required.

There are also liberties. The first stanza quoted above jokes about the trouble even English speakers have with lay and laid. That joke could not conceivably exist in Italian. Well, they say, Ariosto is funny in Italian. So how do you do that in English? Slavitt's way is one way, and you may or may not be comfortable with it. Also Slavitt uses anachronisms, though I suspect so did Ariosto. At one point The Other Reader picked up the book, saw a reference to Freud and Ferenczi (with two other rhymes on Ferenczi!) and exclaimed, "He's not even trying!" Well, yes, he was trying. And maybe you find him trying. You'll have to decide how you feel about that.

I took a bunch of notes about how Ariosto is also placing himself in the tradition of classical epic. Since I've reread the Aeneid relatively recently, that's the one that struck me the most. (Nisus and Euryalus become Medoro and Clorindo; Rodomonte does the Turnus in the walls thing, etc.) But there's also an Odyssean Cyclops episode. Had I read Dante more recently, I'm sure there would be a bunch of resonances there. However, this post is already long enough...and I've just made it that much longer with this sneaky bit of praeteritio...

Anyway, should you read Orlando Furioso? Would you like it? If you're the sort of person who's read to this point in my blog entry, 😉and you haven't read it, then the answer is almost certainly yes. It's funny, it's engaging, and it's important in Western literature. Should you read David Slavitt's translation, especially as your first approach to it? Hmm, I'm less certain about that. I liked the Slavitt,  but I'd read Orlando before. The Penguin is also in ottava rima, by Barbara Reynolds, and it's complete (though the second volume of that seems like it might be out of print.) Slavitt accuses it of being insufficiently funny, but now I'm inclined to make that my third reading of Orlando Furioso. Someday.

But for now I'm keen to go read The Faerie Queene from my Classics Club list, another of those works deeply influenced by Orlando Furioso.
Posted by reese at 10:44 PM