"When the trip was over and I reread my notes, I swore I'd never write anything about Venice, simply because there's nothing more vulgar and futile than encouraging the production of even one more page about the city,...Writing about Venice is like emptying a glass of water into the sea." 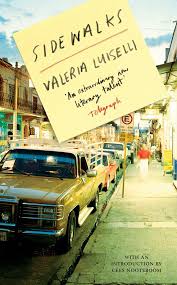 From the second of two essays at least peripherally about Venice in Valeria Luiselli's book of essays Sidewalks. Ahem. She may be capable of irony.

In the opening essay, Luiselli visits Brodsky's grave in the cemetery of San Michele in Venice. After some searching, she finds it, giving her the opportunity to ponder dead Venetians and encounter living ones.

Most of the essays are at least partly concerned with place. I don't really know her biography, but from this she was born in Mexico City, lived for a while in Central America as a young girl, and in India as a teenager, and now in Manhattan. In one of the best essays she bicycles around a neighborhood in Mexico City while pondering the meaning of the Portuguese word saudade. (Meaning roughly melancholy? Or maybe not.)

They touch on longing and loss, though are also often funny. Why is it the young are so given to, and often so good at, melancholy? They can still afford it, I guess. I spent much of my late teens moping myself, listening to Townes van Zandt.

Authors mentioned by Luiselli: Joseph Brodsky, W. H. Auden, Cyril Connolly, Fernando Pessoa, Roland Barthes, Gilles Deleuze, Robert Walser, Walter Benjamin, W. G. Sebald, Wittgenstein, Lichtenberg, Borges, Cervantes. If that list of authors sounds good to you, you're going to like this. It does for me and I did.

It was published by Coffee House Press in 2014. It seems ably translated by Christina MacSweeney.

I'd heard of her before, no longer sure where, but I decided to read this now because she was coming to Toronto for an #AppelSalon event. In the end the event was cancelled. Now I'm regretting that. Her novel Faces in the Crowd is on its way to my local library.
Posted by reese at 7:15 PM