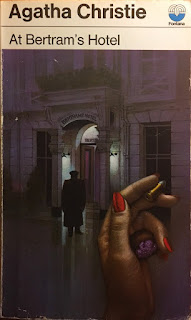 Well, the #1965Club is over in the homeland of its originators, but I've got a couple of hours here, so I'm going to squeeze this last one in...

In the 60s, Bertram's looks like an old-fashioned hotel in London, but we're clued in pretty quickly that there's something else going on. Even the rather unnoticing Colonel Luscombe recognizes that it's impossible for the place to make money run the way it is, and when Miss Marple shows up at the hotel for a fortnight's visit to London she sees through it all pretty quickly.

Christie's novels sometimes used real cases she'd read in the news. One of my favorite of the Miss Marple novels, The Mirror Crack'd From Side To Side, is based on an actual case with an actress and a fan, though the real event didn't involve homicide. This one uses the Great Train Robbery of 1963, though it is transferred to the Irish Mail, and it, too, adds a homicide not present in the actual case.

We're also introduced pretty early to a task force at Scotland Yard investigating a series of robberies by some gang organized by a particularly brilliant criminal mastermind. Who is it? And where are they operating from? Chief-Inspector Davy, called 'Father' by his colleagues because he's close to retirement, is Miss Marple's match in seeming sleepy and at the same time noticing all. One of the things he notices is a series of odd coincidences around Bertram's Hotel. Ah, ha! The game's afoot!

Well, too much more would begin to get spoiler-y. I found it quite enjoyable. Christie is famous for her obfuscations. Now maybe I've read too many mysteries (and possibly I've read this one before, too, though I don't think so) but I didn't find this one too puzzling. But she's not usually praised for her charm--you might go to Ellis Peters, say, for that--but I found this one charming. Miss Marple and Chief-Inspector Davy compete in a sort of knowing and noticing irony. Quite amusing.

Thanks to Kaggsy and Simon for hosting the #1965Club! 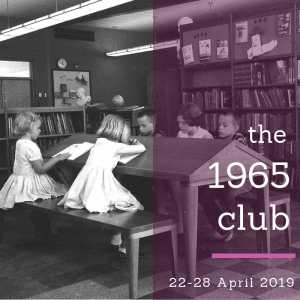