"Sensitive students of music go one of two ways when they hear a really great performance; young violinists, specifically, come away from a Yehudi concert feeling either that they'd better take up tennis or else get more time somehow to practice. Rick was with the last class..." 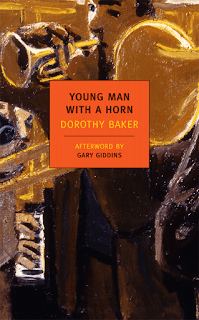 Young Man With A Horn (1938) is Dorothy Baker's debut novel about Rick Martin, a budding jazz trumpeter in the 1920s. The novel starts with him as a young orphan in L.A., raised with no oversight by an aunt and uncle. Rick stumbles on a piano in a Salvation Army hall and teaches himself to play, until the Army realizes he has no real business there. At the age of fifteen or so, working as a pin-setter in a bowling alley, he meets Smoke Jordan, a black drummer five years his senior, doing the janitorial work:


"When he pushed a broom nothing much came of it; he had developed a style of sweeping that was good to listen to from start to finish. It had its drawbacks, however, from a utilitarian standpoint; it raised an awful dust and it didn't get anywhere."

It's Smoke who's his entrance into a more committed world of jazz. Rick learns piano from Jeff Williams, a young black leader of a small combo; Smoke eventually takes over the drums for Williams' combo when the first drummer dies of appendicitis. Rick, though, decides he wants to play trumpet, mostly for its portability, and he studies under Art Hazard, the combo's trumpeter. He gets good. After the Jeff Williams combo moves to New York, Rick plays with a couple of other groups, moving his way up the food chain. Eventually, with a white band, he gets to New York himself.

Baker says, in a headnote, her novel about Rick Martin is based on the 'music, but not the life' of the jazz cornetist Bix Beiderbecke, but it does follow the life of Bix in one important detail: it ends all too soon.

I think Baker writes well about the interaction between blacks and whites. Rick is raised to be casually racist; it wouldn't have been uncommon then, of course, leaving aside just how common it is now. But it didn't sink deep in Rick, and when he meets actual black people, who are nice and know things he values and wants to know, he's a bit puzzled by his reactions, but with some struggle is able to overcome them. It's pretty clear to me Baker had been reading Huck Finn.

The narrator is a person in the story, unnamed, and taking no part in the action, but still close to it. The narrator opens:


"What I'm going to do is write off the story of Rick Martin's life, now that it's all over, now that Rick is washed up and gone, as they say, to his rest."

Baker also writes well about jazz, informed without being didactic. Early on, the distinction between New Orleans-style and Memphis-style is a point, made clearly in the narrator's voice; musicians discuss technical points in a style authentic, but still lucid.


"This is sad; but so is everything, and in the end there is another thing to say about it. The good thing, finally, is to lead a devoted life, even if it swings around and strikes you in the face."

Anyhoo, another successful reissue from New York Review Books. Very good. Reading back over, my description fails to note it can be quite funny so I'm squeezing that in, too. Really my only complaint is the naming of the characters. Rick Martin? Jeff Williams? Might as well have been John Smith. I'm not really convinced by the aggressive Everyman-ish quality of the names. The ability to name characters interestingly is a useful skill and one Baker either didn't have or decided to forgo.

There was a movie made in 1950 with Kirk Douglas as Rick Martin, Dorothy Day as a singer, and Lauren Bacall as Rick's sometime love interest. I haven't seen it, though I'd now like to. The movie gets whitewashed, unsurprisingly I guess; none of the major characters in the movie are black, though they certainly are in the book. There's a hint, though little more than that, that the Lauren Bacall character in the book is bisexual. Apparently that does survive into the movie, though well within the framework of the Hays Code.

Another entry for the TBR challenge hosted by Roof Beam Reader. 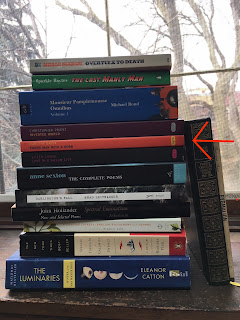