"...in every way except that of mere publishing date, it is a first novel." 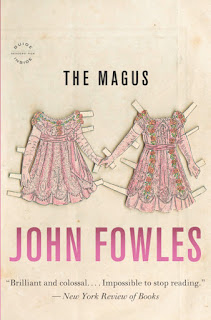 I actually read the second edition, that of 1977, but Fowles in his introduction says it was not substantially changed in either theme or narrative from the 1965 version. He expresses doubts about its merits: "The Magus remained essentially where a tyro taught himself to write novels..." Still, it is the one Fowles novel that shows up on the Random House/Modern Library greatest novels of the 20th Century in English. Go figure.

Here's the story: Nicholas Urfe has recently graduated from Oxford and is knocking about a bit in England, needing a job, wishing to go abroad. He's orphaned and has literary ambitions. He takes a job as English master at a school on the (imaginary) Greek island Phraxos, leaving behind one girl, Alison, and finding there another girl, Lily. But most importantly he finds the Greek/English gazillionaire, Maurice Conchis, who invites him to stay weekends at his villa. And he goes, even after he'd been explicitly warned not to.

Maurice Conchis is the titular magus.

Mysterious things start happening to Urfe. Dead puritans and Edwardian girls appear. Pan-figures and Nazis. Are they ghosts? Are they actors? Are they illusions, post-hypnotic suggestions? Conchis is a hypnotist and a Jungian. For a while he claims he's running an experiment in psychology. Who of these exactly are under Conchis' control and to what extent? Maybe that Edwardian girl likes Urfe or maybe she's acting. Or maybe both.

Conchis tells Urfe at one point he prefers his name pronounced with an un-Greek soft 'ch' so he's actually Conscious? A character de Deukans appears in an embedded story; he may be Conchis in disguise. De Deukans = Latin deducens, meaning leading out? And Urfe, we're told in the introduction, is Fowles' childhood mispronunciation of the word Earth. It's that sort of book.


"I have cordially detested allegory ever since I was old enough to detect its presence."

And while it's not exactly Everyman, episodes of Nazi retributions and interracial sex are there largely to make philosophical points. This risks becoming merely an emotional bludgeon. And yet, and yet. It is pretty readable stuff.

I did anticipate the twist at the end, though, which made the final part feel a bit draggy.

I do think it's a book best read young. From Fowles' introduction:


"I now know the generation whose mind it most attracts, and that it must always substantially remain a novel of adolescence written by a retarded adolescent."

Ouch! Fowles is a little harsh on himself, but I can't say he's fundamentally wrong. However, to Fowles' credit, there is some of that same sardonic humor in the novel itself.

Anyway, I guess the book was a hit when it came out in 1965. I feel like it was of its time. If it had come out in the fifties, corresponding to when Fowles wrote it, it would have had to wait until that moment its natural peers, Steppenwolf and The Doors of Perception, also became popular. I feel like there ought to have been a band called Magus.

And for another view Ruthiella also read it for this week.
Posted by reese at 7:26 PM