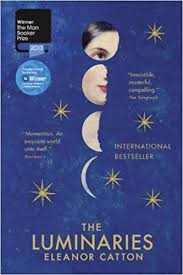 Eleanor Catton's The Luminaries won the 2013 Booker prize. So, you know, you probably don't need me to say nice things about it. But I will anyway... 😉

It's set in 1866, the time of the gold rush in Hokitika, New Zealand, with some flashbacks to a year or so earlier. A dozen men, mostly white, but with one Maori and two Chinese, discover events that seem to implicate them in crimes or diminish their public reputation; it looks like a malign conspiracy, but could any conspiracy be so far-reaching? They decide to meet quietly to discuss, pool their knowledge, and see if they can determine what happened. A thirteenth man, Walter Moody, a young lawyer, happens upon their assembly by accident, and then leads the investigation.

The prose is extravagant, but the pacing is still superb: it's clear to me that Catton is a devoted reader of mysteries: twelve men determining the actions of a villain (if there is one) suggests a jury as well as a certain Agatha Christie novel you may have heard of...; at one point Walter Moody suggests what better place to hide a body than in a coffin (paging Ellery Queen!); and a mention of one red herring (Oh, Ms. Sayers!) made me check to see if that was an anachronism in 1866. (It's not.)

But at the same time Catton writes with the personable omniscient voice of a Victorian like Thackeray:


"Let the man speak for himself!" Nilssen snapped. "What's going on?"

We shall omit Mannering's answer to this question, which was both inaccurate and inflammatory; we shall omit, also, the ensuing discussion, during which Mannering and Nilssen discovered that their purpose in journeying to Chinatown was one and the same, and Frost, who could intuit quite plainly that the commission merchant was holding him in some suspicion over the sale of the Wells estate, maintained a rather sullen silence. The clarifications took some time,...

I found it an engaging voice and a compelling read, and funny as well. But it also has real darkness to it, too: Catton does not soft-pedal the casual sexism and especially racism that would have been all too common at that time; nor, unlike say in Dickens, does she particularly fix things up at the end. Racist acts in particular have no repercussions, alas, a thing all too true to the time and place, I'm sure.

It begins with an astrological chart, and the plot, according to Catton's afterword, is actually partly determined by the horoscopes she cast. Now that part is very un-Victorian, and rather pomo-ish, something like Calvino's The Castle of Crossed Destinies. I'm afraid all that went over my head, though I didn't really mind. I read most of it while off the grid, with no internet access. I'm an Aries, and that's about the extent of my astrological knowledge.

I did find the second half, the unwinding and explaining of what the 'conspiracy' was a bit slower than the first half; there weren't quite enough revelations there, but it didn't matter: I was already completely hooked...

One of my #20booksofsummer, and here's the summer-y location where I was when I read it... 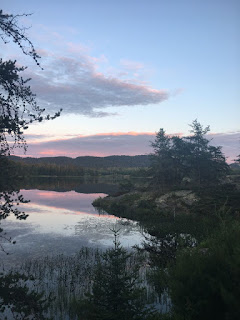