"I take SPACE to be the central fact to man born in America, from Folsom cave to now. I spell it large because it comes large here. Large, and without mercy.

It is geography at bottom, a hell of a wide land from the beginning. That made the first American story (Parkman's): exploration." 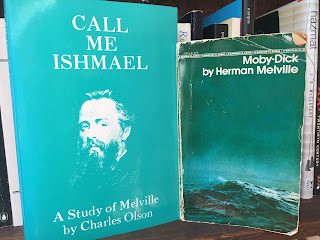 Charles Olson was born in Massachusetts in 1910 and grew up there. He attended Wesleyan, Yale, and finally worked on a Ph.D. at Harvard in American Studies. In 1939 he won a Guggenheim grant to study Melville. Call Me Ishmael was the result. After various war-related jobs, and a stint working for the Democratic party and FDR's re-election in 1944, the book came out in 1947. Though he had academic qualifications, as the quote above might show, it's not exactly an academic book.

Olson might have seen SPACE as the crucial American quality because he occupied a lot of it: he was 6'8" tall.

The book has a certain oracular quality to it:


"I am interested in a Melville who decided sometime in 1850 to write a book about the whaling industry and what happened to a man in command of one of the most successful machines Americans had perfected up to that time--the whaleship.

This captain, Ahab by name, knew space. He rode it across the seven seas. He was an able skipper, what the fishing people I was raised with call a highliner. Big catches: he brought back holds barrel full of oil of the sperm, the light of American and European communities up until the 19th century.

This Ahab had gone wild. The object of his attention was something unconscionably big and white. He had become a specialist: he had all space concentrated into the form of a whale called Moby-Dick. And he assailed it as Columbus an ocean, La Salle a continent, the Donner Party their winter Pass."

"Some men ride on such space, others have to fasten themselves like a tent stake to survive. As I see it Poe dug in and Melville mounted. They are the alternatives."

After the publication of Call Me Ishmael, Olson first taught and then later became the rector of Black Mountain College, in the 50s the gathering place of a substantial strand of modern American art: poetry, dance, music, sculpture and other visual arts; Robert Duncan, Merce Cunningham, John Cage, Robert Rauschenberg, Cy Twombly. Olson himself was also a noted poet.

I read the book umpteen years ago and I remembered it more for its oracular quality about the nature of American art--about which I think he's interesting and astute--and I suspect that's what it's read for now. After all my edition is City Lights Books, and not some university press. I was twigged to it by friends interested in the American avant-garde, not by Melville scholars. He's definitely influenced by his era: the Great Depression has led him to think about American art in terms of economics and industry.

But in reading it again, and right after reading Moby-Dick, I have also discovered that he did real work on Melville. The Melville revival--the Moby-Dick revival--is, in 1947, not to mention 1939 when he gets the grant, still quite new. It's not so long since Melville died. Olson has gotten hold, from Melville's granddaughter, of Meville's personal copy of Shakespeare, in six volumes, the one Melville read just before composing Moby-Dick, and there are scribblings in it and Olson builds arguments around them. He's seen Melville's copy of Don Quixote, which Melville read in 1856 and has other scribblings, and Olson has things to say about that.

Olson has also read around in the history of the whaling industry and is full of fascinating facts: whaling was the third largest source of export goods for the US in the 1840s; of 900 whaling ships world wide in 1846, 735 were American; the Essex, the ship destroyed by a whale and model for the Pequod, set sail on its fatal voyage in 1819, the year of Melville's birth; of the eight survivors from the voyage of the Essex, at least five went on to become captains of their own ship.

Actual facts about Olson come from Robert Creeley's introduction to Olson's Selected Writings, which I also pulled off the shelf to look at. 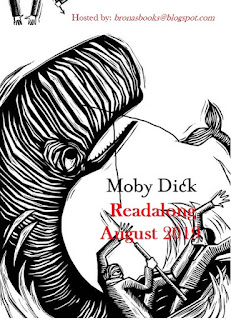