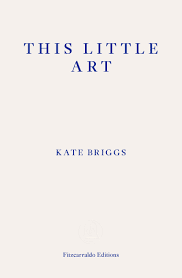 Well, I've got a couple of hours to squeeze in one last book for Kaggsy's and Lizzy's Fitzcarraldo Fortnight, but I can't dilly-dally...

This Little Art by Kate Briggs is an essay/meditation on the translation of works from one language to another. Briggs herself is the translator of two of Barthes' late lectures from French to English and she brings that experience to bear, but she also looks at other translators, in particular Helen Lowe-Porter (the person responsible for originally translating most of Thomas Mann into English) and Dorothy Bussy (who was André Gide's first translator into English.) And, in fact, the title of her book comes from an off-hand, possibly meant as disparaging, comment by Lowe-Porter about her own work.

Lowe-Porter has taken a bit of a beating over the years, and Briggs is supportive of her work and gives reasonable indulgence to Lowe-Porter's method and the possibility of errors. She's even better, I thought, on the complicated, but loving, relationship between Bussy and Gide, which comes across as touching in Briggs' telling.

For me, one of the most interesting suggestions in the book is Briggs' notion that the translator/artist has a sense of recreating the original work, adopting it as one's own, pushing it almost into the area of original creation.


"All books are made from other books and so, in their way, all books are translations in one way or another." (p.138)

She cites an essay by Elena Ferrante with an interesting example about Ferrante's reading of Madame Bovary and wanting to write a story in Italian that could the very sentence Ferrante found in Flaubert. She doesn't cite, but could, something like Zadie Smith's retelling of Howards End as On Beauty. Is that a translation? Well it is a carrying-across (the Latin root of the word) of a story on class relations, on the relations between art and commerce, from 1900 to 2000. From a white England to a multiracial United States.  It's a fascinating idea and Briggs pushes it hard, but is careful not to push it farther than it should go.

The other thing that definitely needs to be remarked is the prose, and here, I'm afraid, I was less taken with the book. I wrote 'essay/meditation' above with deliberation: Briggs has a way of meditatively circling around an idea without ever quite lighting upon it. Some of this may come from Barthes, whom I scarcely know (and haven't read the works Briggs translated.) Sometimes it may be to remind of the way a translator works, trying out different words before settling on the preferred one. But some of it I just found maddeningly repetitive. Robinson Crusoe's table! I love Robinson Crusoe. But I will not be able to reread Defoe for quite a long time into the future without thinking, "Robinson Crusoe needs a table...He wanted a table because it was wanting." (p.237) And yes, I did definitely elide there.

In Googling for an image of the cover, I saw that Benjamin Moser reviewed the book for the New York Times. Moser himself is sometimes a controversial figure, but he cares about translation and is responsible for our most recent versions of Clarice Lispector. (As translator, but also as general editor.) But he fundamentally misread this book, I'm afraid. He sees Briggs as advocating some sort of translatorial relativism, as if all translations are equally good. No. "Translation cannot dispense with...the effort to get it right." (p.140) Now maybe Briggs' way of talking around an issue and seeing all sides made it a bit more difficult to see what she was saying, but, heck, I got it, and I felt Moser was just phoning it in, working out some issues he'd been irritated about in the past. Bah.

And that leaves me with no unread Fitzcarraldo Editions books! I may very well have to do something about that...

Thanks to Kaggsy and Lizzy for the great idea and for hosting! 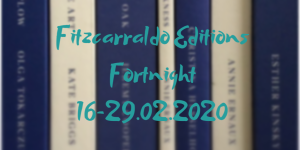