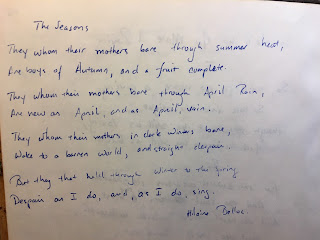 They whom their mothers bare through Summer heat,
Are boys of Autumn, and a fruit complete.

They whom their mothers bare through April rain,
Are new as April, and as April vain.

They whom their mothers in dark Winters bare,
Wake to a barren world, and straight despair.

But they that hold through Winter to the Spring
Despair as I do, and, as I do, sing.

I'm a spring baby myself, though early spring. Might have been closer to that season of 'dark Winters' in my more northerly climate.

This comes from my commonplace book of years ago. My handwriting has only deteriorated since then. I no longer have any idea where I first came across this poem, but in Googling to check the text it seems to show up in the Internet Archive's version of the second edition of Belloc's Sonnets and Verse, (1938) but it doesn't show up in the earlier version of that book at Project Gutenberg. According to the Internet Archive, the capitalization should be as I've typed it, not as I've written it.
Posted by reese at 5:34 PM