Poem For A Thursday: Cardinal Wolsey 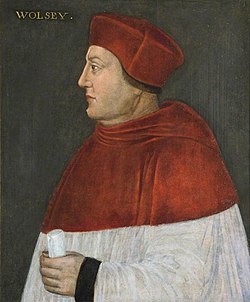 So farewell to the little good you bear me.
Farewell! a long farewell, to all my greatness!
This is the state of man, to-day he puts forth
The tender leaves of hopes; to-morrow blossoms,
And bears his blushing honours thick upon him;
The third day comes a frost, a killing frost;
And, when he thinks, good easy man, full surely
His greatness is a-ripening, nips his root,
And then he falls, as I do. I have ventur'd,
Like little wanton boys that swim on bladders,
This many summers in a sea of glory,
But far beyond my depth: my high-blown pride
At length broke under me, and now has left me,
Weary and old with service, to the mercy
Of a rude stream, that must forever hide me.
Vain pomp and glory of this world, I hate ye:
I feel my heart new open'd. O! how wretched
Is that poor man that hangs on princes' favours.
There is, betwixt that smile we would aspire to,
That sweet aspect of princes, and their ruin,
More pangs and fears than wars or women have;
And when he falls, he falls like Lucifer,
Never to hope again.

This is a soliloquy by Cardinal Wolsey from Henry VIII. Wolsey, has just been fired from his job as Lord Chancellor, because Wolsey was unable to secure a papal annulment of the marriage between Henry and his first wife, Katharine of Aragon. Ahem. Henry usually didn't just fire people, and Wolsey is on the run for what he fears is his life.

Well, be it Fletcher or Shakespeare, this is one of my favorite soliloquies, and from a play not often read or performed. I bring it out now for all you who are (re)-reading Hilary Mantel in preparation for the drop of the final part of her Thomas Cromwell trilogy this spring. I haven't started rereading myself, but I'm planning on it.

'Mercy/of a rude stream' served Henry Roth as the title of his magnum opus.

Jennifer has a powerful Tony Harrison poem this week.