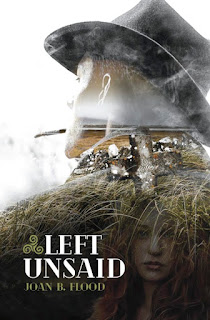 Left Unsaid is the story of Delia Buckley, a Catholic Irish woman born in the late 1940s. The story is mostly set in Kiltilly, what I assume is a made-up village, near to Limerick, in Ireland. The novel occurs in two times:

In 1967, Delia has an affair with Daniel Wolfe, married, twenty years older, a famous author, Protestant, and owner of the village's Big House. She gets pregnant, thinks maybe he'll leave his wife for her, but, of course, she's wrong.

More of the novel occurs in 1990. Daniel Wolfe is now widowed and recently diagnosed with terminal cancer; Delia Buckley is an established nurse specializing in end-of-life care. Daniel offers to hire her--at well above her usual rate--to look after him until the end. He's presumably feeling guilty, and she's wary of the tangle, but she needs the money: her sister is institutionalized and her aging parents' farm is mortgaged to the hilt.

The novel starts with a bang, and it ends well, too, with a satisfying amount of surprise and resolution. There was a point in the middle, though, where I was a little less happy. With a title like Left Unsaid and the backstory outlined above, we expect some secrets. Quite unsurprisingly Delia didn't get the abortion Daniel gave her the check for in 1968. Ah, but where's the child? was a question we were clearly meant to ask.

But there were too many secrets. (So very many secrets!) This led to some portentous prose in the middle whose double-meaning irony I admit to not quite seeing through, but was too obviously there. "Surely she'd understand that if her mother felt the need to stay away from the family all those years there was a good reason for it." "Your mother kept things from you for a good reason, I'm sure." There were a few too many statements along those lines.

Ah, well. I still enjoyed it. The prose is clear and straightforward, with a pleasant acknowledgment of Irish dialect. (For example, streelish--a word I didn't know and which I see my spell-checker disapproves of, but is easily Google-able.)

Left Unsaid came out with Signature Editions in 2017. Part of my process of poking around in Canadian small presses. Joan B. Flood is a Canadian who emigrated from Ireland. She's written an earlier YA novel, plus some shorter works, none of which I've read.
Posted by reese at 8:43 PM