"But just what is the Gyntish self?" 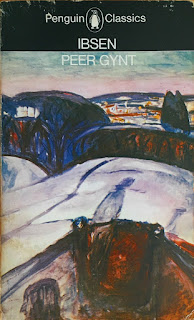 I reread this to prepare for reading something else in the future. We'll see how that pans out...

Peer Gynt (1867) is a long dramatic poem, a play if you will, by Henrik Ibsen, but so long as to be almost unperformable. At any rate, Ibsen didn't imagine it being performed, until later when he did, and got his acquaintance Edvard Grieg to write some now-famous incidental music for a production.

Peer Gynt is the (anti-?) hero of his namesake play. His father is dead, having died drunk and nearly broke; his mother is still alive, exasperated by her wayward son, but not to the point where she will let anybody else say the bad things about him she allows herself to say.

There was an actual Peer Gynt fifty or a hundred years before the play, but he had already moved into folklore by the time Ibsen took him up as a subject.

The problem with Peer is that he's an irresponsible liar. I'm not sure I should be reading any more things (more than I already do) at this time about irresponsible liars, but be that as it may. When the play starts, Peer, returning home after a month supposedly hunting--his clothes are shredded--tells his mother he was abducted by a flying reindeer. She doesn't believe him, but his lies are so vivid, she starts to retroactively fear for his life anyway.

The play/poem, 200 pages in my edition, is Peer's entire life; the irresponsibility overwhelms the early lying, but then sheer immorality overwhelms the irresponsibility. Peer and his mother need money; there's a neighbor heiress who is attracted to Peer and is about to be married against her wishes. At that wedding Peer sees Solveig; maybe she's the one he wants? Instead Peer abducts the bride, but in the end refuses to marry her; and so now he's now wanted by the law.

What does Peer really want? What is that Gyntish self? He meets the daughter of the king of the trolls (or is that just a fantasy?) and could marry her, but then he'd have to live the trollish life, adopt the trollish motto: "to thy own self, be...enough." (There's also the little matter of a required eye surgery that makes anything ugly look beautiful.)

You see the beginnings of the existentialist crisis here. He flees Norway to try on various roles, all of which temporarily seem the proper Gyntish self: rich man, prophet, lover, even archeologist. None of them last. He behaves pretty badly in doing these things: it's the slave trade makes him rich, etc.

This makes it all a bit Faust with a twist.

Does Peer save himself from the Button-Moulder? The ending is deliberately ambiguous. Should he have been saved? Enh, I don't know. Poking around, I found this quote from Robert Bly, "He does horrible things throughout the play and yet you end up loving him very much." I'm not sure I entirely felt that love, but clearly some do, and your mileage may vary...

In any case, I suppose even basically horrible people need to find themselves, too.

The edition I read was an older Penguin translated by Peter Watts. It was a verse translation and it was OK, but I wasn't amazed. I found the Robert Bly quote looking for alternative translations. Watts:


"...with a huge concern like mine,
that gave employment to some thousands,
to close the firm down altogether
becomes particularly hard."


"Thousands worked for me--to an enjoyment.
But I became concerned about unemployment!"

I'm not entirely sure between those two. I assume the Watts is much closer to the text, but Ibsen rhymes in Norwegian, and the Bly has more brio. The Bly doesn't seem to have ever been printed, though it was the text for a production at the Guthrie Theater in Minnesota, with Mark Rylance (!) as Peer Gynt in 2007. That would have been fun. Penguin has replaced the older Peer Gynt I have with a new translation by Geoffrey Hill; Oxford has one translated by Christopher Fry. If you have ideas, let me know! Because my copy has basically dissolved after this reading, and Peer Gynt is after all a classic...

Some other quotes I copied out from the Watts translation:

The King of the Trolls: "My son, we trolls aren't as black as we're painted--
that's another difference between us and you!"

(Meaning, we humans *are* as black as we're painted?)

The Great Boyg: "He was too strong. There were women behind him."

Peer Gynt: "'Exalted?' Yes, that's what will happen to me;
Anything else is unthinkable."

Peer Gynt: ...I've just one question first:
what, after all, is this 'being one's self'?

The Button-Moulder: A curious question indeed, on the lips
of a man who has just--

The Button-Moulder: Being one's self means slaying one's Self
But that answer's presumably wasted on you,
and therefore let's say: 'Above everything else
it's observing the Master's intentions in all things.'

Peer Gynt: But what can one do if one's never found out
what the Master intended?

The Button-Moulder: One just has to guess.

Peer Gynt: But a man's intuitions so often prove wrong,
and then one is sunk, as it were, in mid-ocean!

The Button-Moulder: Exactly, Peer Gynt, it's when insight is lacking
that the lad with the hoof makes the best of his captures.

So: to thine own self be true?