Muriel Barbery's The Elegance Of The Hedgehog 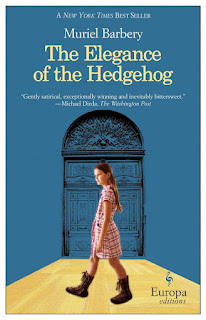 The Elegance of the Hedgehog is Muriel Barbery's second novel. It came out in French in 2006, won several awards, and was a huge success; it was translated into English by Alison Anderson in 2008, where it also succeeded, and led to her first novel Gourmet Rhapsody coming out in English a year later.

It's told in two alternating voices, that of Renée, the widowed concierge of a hôtel particulier, (a high-end condo as far as I can tell) and of Paloma, the twelve-year-old daughter of one of the rich residents of the hôtel. Both are preternaturally thoughtful and well-read, and both are determined to hide that fact. Renée listens to Mahler and reads Marx, but knows that no slothful, irritable concierge can be seen doing any such thing. Paloma can see no way to use her haiku-writing and her disdain; she plans to commit suicide on her next birthday.

And both do hide their intelligence and their goals and their dissatisfactions, until a rich Japanese man, Kokuro Ozu, buys a vacant floor, and sees through the both of them.

It's the voices in this that make it work. It's a funny book--but alas all too accurate--about the fact that smart people, and especially smart women, find it socially difficult to demonstrate and use in public their intelligence. Especially true, as in the case of Renée, where the class background is 'inappropriate.' Each of the two women present the events of the story (which overlap) in little mini-essays that are intelligent and thoughtful and funny.

But I do feel the plot needed some work in this. There is one, but it starts late and then rushes to a not very satisfactory conclusion. Paloma has an insufficiently justified epiphany that makes things OK again for her; Renée's fate was equally rushed and unjustified by events.

Still I found it amusing and insightful enough that I got the new one by Barbery (The Life Of Elves) from the library, where it will be the subject of the next book club meeting at my local branch.

It also fits WomenInTranslation month, which, though I hadn't planned it, I'm proud to now be part of.
Posted by reese at 4:44 PM