Narrative of the Life of Frederick Douglass, An American Slave, written by himself

Sincerely and earnestly hoping that this little book may do something toward throwing light on the American slave system, and hastening the glad day of deliverance to the millions of my brethren in bonds--faithfully relying on the power of truth, love, and justice, for success in my humble efforts--and solemnly pledging myself anew to the sacred cause,--I subscribe myself, FREDERICK DOUGLASS. Lynn, Mass, April 28, 1847. 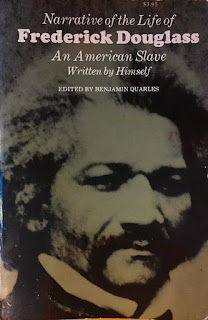 I think we may say he succeeded.

I was expecting the book to be important, and damning, and even at this late date to be both shocking and painful, and it was all of those things.

What I wasn't expecting was how good a read it is. The quote above, the very end of the book, while affecting, is not really representative of the prose style, which is much more straightforward and powerful. Douglass is judicious in his use of detail, his pacing is superb. The Other Reader asked, wasn't Douglass' prose flowery and Victorian, and the answer is no. (The prose of William Lloyd Garrison, who wrote the contemporaneous introduction, very much is, and is larded with exclamation marks.) Douglass names names, and provides places and dates (except that of his own birth, which he doesn't know) and those people he names and those places he sees are seen and known by us as well. It is short, at 150 pages, and swift-moving.

His sentiments are occasionally Victorian. Overseers are condemned nearly as much for their cursing as for their whips. Reading this, I imagine Douglass was sympathetic to the temperance cause.

This edition comes with a useful introduction by the historian Benjamin Quarles. This is the first of three biographies Douglass wrote; this one was a best-seller by the standards of the time; he wrote a second, longer one on the eve of the Civil War, which also sold well; his third, written after the war was over, met indifference; his publishers told him nobody cared anymore. Alas, they were probably right.

I took an undergraduate class on African-American literature with Ntozake Shange (Rice University, class of '83) and this has been on my TBR pile since then. Houston to Chicago to California to Toronto--it's traveled a bit. It was one of the supplemental books for the course. (Really!) At the time I read most of the supplemental books as well as all the required ones, but this one escaped. Paul Laurence Dunbar's Poetry, Jean Toomer's Cane, Ralph Ellison's Invisible Man, Arna Bontemps' Their Eyes Were Watching God, Richard Wright's Native Son, Ishmael Reed's Mumbo Jumbo, Clarence Major's Reflex and Bone Structure, maybe a couple of others, all good as I remember. And it's clear I should have read this one, too.

But thanks to the mighty (though possibly puerile) power of the Classics Club spin, I now have.
Posted by reese at 12:32 AM