"She looked out of the window and she thought that it would be hard to find a more suitable setting for a vision of the end of the world than these mountains." 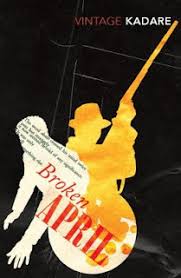 Well, Ismail Kadare isn't winning any friends in the Albanian tourist bureau, I can tell you that.

Broken April (1982, English tr. 1990) is the story of a blood feud in northern Albania in the 1930s. The novel begins when Gjorg, goaded on by his father, kills the member of a rival family, Zef, who had killed Gjorg's own brother. It's the middle of March when the reluctant Gjorg succeeds in his revenge, and blood feuds have such elaborate rules that he knows he's safe for thirty days, but then his April is likely to be broken by his own death. This feud has gone on for seventy years with forty-four graves, half in the Berisha family and half in the Kryeqyqe family.

There was a pronunciation guide, but I still won't even try to pronounce the name Kryeqyqe... When I was a stamp-collecting child there was an Albanian couple living in the apartment below me; they were an important factor in my stamp-collecting prowess. They had (wisely?) changed their name to Harris when they emigrated to Chicago.

According to the Kanun, the ancient law governing the remote highlands of Albania,  Gjorg must travel to the castle to pay the fee for a successful blood feud killing. He is in some doubt whether he'll be able to reach the castle within the prescribed time limit for paying his fee, whether he'll even be able to find the castle. Aha, I said, Kafka! and I see from Wikipedia, I'm not the first to think that: the novel has that sort of grim humor. But Gjorg does reach the castle, and the novel does reach its end. It also presents other perspectives: after following Gjorg for a while, the novel shifts to a sophisticated couple from the capitol, intent on seeing the real folk Albania. Its her perspective on the scene I quote above. Then it shifts again to the steward of the castle, who specializes in all administrative matters related to blood feuds, before returning again to Gjorg at the end.

The novel satirizes the economics involved in paying blood feud fees; it also satirizes, less savagely, the romantic impulse that drives the urban couple to undertake what we might call poverty tourism. Kadare was still living in Albania, and the brutally repressive Enver Hoxha was still the leader of the country, so maybe he thought some of that was necessary. My edition has no introduction or notes beyond that pronunciation guide, so I don't know, but it may be that those things didn't help or only helped so far as they kept him alive. I believe a lot of Kadare's fiction was first published in French and didn't appear in Albania until after the fall of the Communist regime.

My edition also doesn't name the translator, which I find very bad form.

This is the second novel I've read by Kadare, one of those authors who get talked about for the Nobel Prize, should they ever award it again. The other was The File on H. I found them both good, but I liked The File on H better. Kadare sees Albania as a place where classical mythology lives on, which is bound to appeal to me as an ex-classicist. This one, with family blood feuds, alludes to Aeschylus and the Oresteia; the H of The File on H is Homer, who may or may not still exist in Albania.