Muriel Barbery's The Life Of Elves 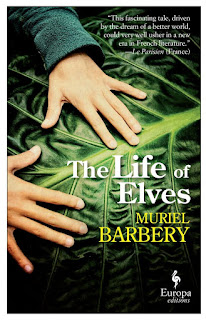 The Life of Elves (2015, 2016 for the English translation) is Muriel Barbery's third book, and her first after the enormous success of The Elegance of the Hedgehog.

That's always a tough place to be, and without making a very thorough search, I think the general feeling is that it was a falling off from her previous one.

But I liked it better. And I liked the previous one.

It's a story of two changeling girls, Maria raised in France, and Clara raised in Italy. They have mystical powers that need nourishing and mystical enemies that need to be kept away until they've matured enough to face them. The first of their challenges ends the first book; there's supposed to be a second involving the same characters.

I think Barbery has pretty successfully captured a folk tale atmosphere in this. It favorably reminded me of Sylvia Townsend Warner's Kingdoms of Elfin or ballads like 'Thomas the Rhymer' and 'Tam Lin.' But at the same time she's using that atmosphere to go after her usual philosophical concerns. Now it's true there are places where the prose felt convoluted, and I assume that's there in the French. Alison Anderson, who translated both her earlier books, also translated this, as well as other authors, and she seems to me to be good at it. I can't imagine she introduced the convolutions of her own.

It is certainly more mystical and less funny than her previous books; well, that probably goes with the fairy tale territory. But the secondary characters were engaging, maybe particularly the Italian maestro, the French priest, and the drunken warrior. I'll be reading the sequel when I can.

And now I want preserved chanterelle pie! When the French family decides on a big country meal for a strategy session, that's what they serve.
Posted by reese at 4:41 PM