Romeo and Juliet at the Royal Shakespeare Company

For never was a story of more woe
Than this of Juliet and her Romeo. 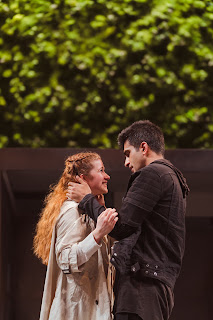 We went to see the simulcast of the new Royal Shakespeare Production of Romeo and Juliet yesterday, and I read the play first to have the language fresh in my head before seeing it.

That's Karen Fishwick as Juliet and Bally Gill as Romeo to the left there.

I thought the production was good, but not amazing. The actors were all allowed their regional and class accents, and I thought that was fun, though it made me especially glad I'd just reread the play. Karen Fishwick, for example, is a Scot, and Bally Gill is from Coventry. There was no Oxbridge or middle Atlantic sound to any of them.

The prince Escalus was played by a woman. Having seen a female Lear (once, very good!) and several female Prosperos, swapping a woman for a man in a leadership role is no longer very surprising. I'm happy to see it, but it doesn't earn one points any longer. She was good, though.

More interesting was the casting of a woman, Charlotte Josephine, as Mercutio, the high-spirited, perpetually joking friend to Romeo. Physically I thought she was interesting in the role, very lively, but maybe a little too frenetic, and some of her lines felt swallowed.

While the leads were both very good, I didn't see anything I didn't expect there. The most interesting interpretation I thought was that of Benvolio by Josh Finan, who plays the role with more comic verve than I expect. Especially in his first scenes, the looks he gives the exuberant Romeo are a hoot.

The director, Erica Whyman, in an interview before the play reminded us that the play ends with a reconciliation, that all this tragedy unusually enough leads somewhere, which is a good point. But I wasn't convinced by her overall interpretation, which didn't sufficiently lead up to the point she seemed to want to make. And, while there are Gothic elements around the crypt at the end, she really emphasized them in this production, with ghosts of Tybalt, Mercutio, and Montague present as well as the bodies of Romeo and Juliet. It felt a little odd as a ghost story.

Ah, well. In some ways, a competent standard production of Romeo and Juliet. Apparently it's a success and it's bringing young people in to see it, so that's all to the good.