Oh, what a tangled web we weave
When first we practice to deceive. 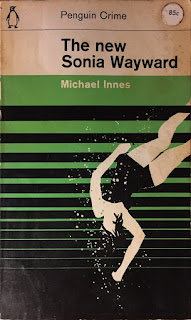 Michael Innes' The New Sonia Wayward (1960) could be read as demonstrating that old saw as being completely true.

Colonel Ffoliot Petticate (what a handle!) is sailing off the coast of England with his wife who is generally not known as Mrs. Ffoliot Petticate. No, she's Sonia Wayward, author of intellectually unsatisfying (at least to Petticate) but lucrative romances. And then she dies.

Her death is innocent enough. Colonel Petticate is an ex-Army doctor, and while he's no longer practicing, he's quite sure she's dead. An aneurysm or an embolism, he doesn't have the instruments and he's not sure about the cause. Oh, well. Their marriage was no longer anything more than friendly, and he hadn't really forgiven her for referring to him as 'quaint' when talking to one of her girlfriends.

But for reasons that are not particularly justified, he tips her body into the ocean and proceeds to try to appear as if his wife has just gone away. It will be convenient: he can write the next Sonia Wayward novel (the 'new Sonia Wayward') and keep cashing the checks.

Did his wife abandon him? (Embarrassing.) Did he kill his wife? (Criminal.) Who wrote the new Sonia Wayward? (Fraudulent.) There are some funny bits and Innes can be a successful farceur.

However, I just don't like it when, in a novel, suspense is generated because an otherwise smart person does something stupid, and this one is full of it. We're meant to like Petticate and think him of above average intelligence. Except he keeps failing to show it.

This one is helped along at the end with a couple of amusing, if improbable, coincidences, but the final solution was visible a mile away, I'm afraid. So, for me at least, not one of the better Michael Innes mysteries.

Vintage Mystery Challenge. Silver. Who. In/Retired From The Armed Services.

Which completes the Silver Age part of my challenge. I've got a couple to go on the Gold Age card.

The old saw, which I thought of when I'd barely started the novel, is actually Sir Walter Scott. I didn't know that...
Posted by reese at 10:32 PM