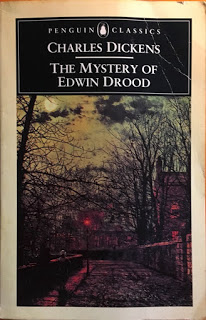 Hmm. I just read and blogged about this novel less than a year ago, and that was already a reread. Maybe I'm just a bit obsessed by what happened to Edwin Drood? We'll never know, of course, and realistically it could very well be that Dickens himself hadn't made up his mind. He radically changed the ending of Great Expectations after finishing it. So then, the question is, what was Dickens likely to have decided should have happened? Or the more answerable question might be, what do I think should have happened?

In case you're not as obsessed with Edwin Drood as I am: it was Dickens' last novel and he died with it half-finished in 1870. Edwin Drood, a young orphan of some means, disappears about halfway through the pages we have. He had been engaged to be married to Rosa Bud, but just before his disappearance they broke it off. His watch and tie pin are found by the side of a river near the last place he was seen. Accident? Murder? Wilful disappearance? All are possible.

Well, I speculated about the possible resolutions in that previous post, so no need to repeat myself here.

What particularly struck me about it on this rereading is the modern feeling of the politics. Neville is dogged by assumptions of guilt simply because of his race. Mr. Sapsea, the mayor of the town, and Mr. Honeythunder, a 'philanthropist'--it's the word used, but Dickens would completely approve of thinking of them as scare quotes--retail condemnations publicly because of his skin color and nothing else. I'm reminded of so many cases, but let's say particularly the Central Park Five.

The extent of Jasper's overall villainy remains obscure to me, but he's definitely at his most villainous in a #metoo moment of teacher-student politics and emotional blackmail. In the chapter 'Shadow on the Sun-dial', he corners the frightened Rosa; she's perfectly aware of his obsession with her; she was his student but has already fled from that. But now she will entertain his declarations of love or he'll arrange that Neville is convicted for murder, guilty or no. Rosa had to give up her music lessons earlier; now she feels she has to flee her home as well.

Maybe I'm just seeing contemporary political concerns in everything these days and reading Dickens anachronistically. That's possible. But it really doesn't feel like it.

Vintage Mystery Challenge. Why. It's an author you've read and loved before. (And obsessed over?)

Back To The Classics. Reread A Favorite Classic.
Posted by reese at 11:13 AM