He arrives full of excitement and high expectations; eagerly he gets to know everybody who is writing, as he already knows everything they have written. He rushes about from one group to another. He attends all the literary teas, the publisher's luncheons, the theatrical openings, the miscellaneous drinking parties. And he brings to it all his shrewdness, his audacity, his humor, his extraordinary memory and his undiscourageable enthusiasm for literature. He makes us feel, as we read this record, that there is something really important in the air, that the work of all these people is interesting, that their opinions deserve attention. 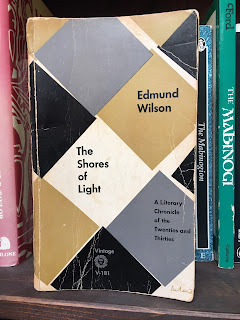 Edmund Wilson's The Shores of Light came out in 1952, but it's largely a collection of his literary journalism in the 20s and 30s.  It's a fascinating history of the American cultural scene of the time. That quote above is from Wilson's review of Burton Rascoe's A Bookman's Daybook, but it could have been about Wilson himself.
Wilson really was in the center of everything. He was the managing editor of Vanity Fair for two years starting in 1920 (he was only 25!) and then later the literary editor at the New Republic for five years. He reviews the first publication of 'The Waste Land'. He's reading André Malraux in French before Malraux has appeared in English. He's involved in the controversy over James Joyce' Ulysses. (Demolishing the criticism of the New Humanist critic Paul Elmer More.) He's praising Hemingway and Dos Passos when those authors are nobodies.
Still, on the whole, I wouldn't go to this book for actual literary criticism, especially in the earlier sections. There's better literary criticism out there. Wilson himself wrote better criticism--I'm reading Axel's Castle at the moment. Think of this as history or chronicle. As I noted earlier, he's not very good on Willa Cather. He writes a series of columns about the state of American poetry that are simply swingeing takedowns and not very insightful: [of Robert Frost, for example] "I find him excessively dull, and he certainly writes very poor verse."
But the book was assembled in the fifties, and he's aware of his limits. In a footnote to one of those poetry assessments, he notes:

"Maxwell Bodenheim [the Chicago, later New York poet] described me in some such phrase as 'a fatuous policeman, menacingly swinging his club.' In rereading this essay...I have sometimes been reminded of this."

Wilson later told his future biographer Lewis Dabney that he didn't really learn to write until about 1925. This is...kind of true, and represents about a quarter of the book. It's interesting to see him get better in something approaching real time.
The book is at times touching. It's framed by essays written in the 50s, the first, at the death of Christian Gauss, the Princeton professor whom Wilson had studied under; the last, at the death of Edna St. Vincent Millay, which was especially good, remembering life in Greenwich Village in the 20s--Wilson had proposed to Millay at the time, but she turned him down. (I also learned from Dabney's biography that Wilson lost his virginity to Millay, which may have added a little extra poignancy to his recollection.)
Willa Cather aside, Wilson is actually quite good on female authors, praising them, but also treating them seriously. Millay, in particular, who is, of course, a major poet, but also Louise Bogan, Elinor Wylie, Edith Wharton.
The book can be paired with Wilson's The American Earthquake, a similar collection of his journalism covering the 20s and 30s, but on political topics. I read that a couple of years ago. Two 800-page books, representing a mere fragment of what he wrote in the period. The man kept busy.
Also there was this, amusing for bloggers:

"I have recommended lenience toward reviewers who use the books they are supposed to be reviewing as pretexts for expressing themselves; but only in cases where their articles--what happens comparatively rarely--are interesting in themselves. There is no excuse at all for an uninteresting review that tells nothing about the book. The reviewer, at the very least, should be expected to supply information. The retelling of the story of a novel, the summary of an historical or philosophical book, the selection of representative passages and the attempt to communicate the quality of a poet, is the most boring part of the reviewer's business, but it is an absolutely essential part."

And it left me with a bunch of new books I want to read. What more can a book about books do?

I got Lewis Dabney's Edmund Wilson: A Life in Literature (2005) from the library to go with this; I've only read it so far through the period in question, but I will finish it. That's where I got the skinny on Wilson and Millay. Dabney also edited the Wilson Library of America volumes.

The biography is pretty good, but editing, even, it seems, at a prestige publisher like Farrar, Strauss, is a lost art. The phrase 'shores of light' as Wilson tells us, comes from the Latin 'in luminis oras'. Wilson got it from Virgil, (Georgics, Bk II.47) though it appears a few other places as well. In Virgil, it's a comment about the heliotropism of plants; prosaically I might translate the line: "On their own plants grow toward light sources." Wilson romanticizes the line a bit in a poem he wrote (I'm quoting the end of his poem which appears in the essay on Millay):

My stubborn heart to-night
Divines the fate of souls who have not died,
Buried in sullen shadows underground--
That reach for ever toward the shores of light.

I guess that's his sense of New York artists in the 20s and 30s.
Well and good. But Dabney quotes the tag twice, once as 'ad liminas oras' and once as 'in liminas oras', neither of which are what Virgil wrote and also not what appears in my beat-up Wilson paperback. They're not even good Latin. Argh!
I'm willing, possibly, to let Dabney slide on this: editing and typesetting are no longer processes over which authors have much control. In any case FSG should have done better. But then Dabney calls Robert Service an 'inspirational' poet! I'm not sure I'd even want to meet the folks for whom 'A bunch of the boys were whooping it up in the Malamute saloon' was inspirational. And anybody who found 'The Cremation of Sam McGee' inspirational would be just downright creepy. 😜

The Shores of Light was the first book of the year for me, though it took me a week to write about. A good start! How's your reading year going?