"Their hearts were full of feeling, but they could give it no expression--Forsytes that they were." 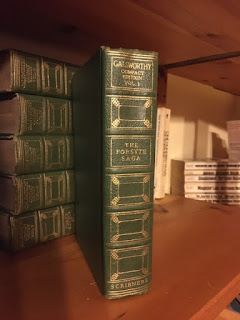 In Chancery (1920) is the second novel of John Galsworthy's Forsyte Saga. The Man of Property (1906) was the first; I read that recently as well.

In the new novel, Irene Forsyte is separated from her husband Soames Forsyte; she's retaken her maiden name, calling herself Mrs. Irene Heron, but they aren't divorced.

Irene at 37 is just as beautiful as ever, but Soames, at 44, is feeling the winds of time at his back. He and Irene never had a child; he wants one, a son in particular. Should he, can he, reconcile with Irene? It's not too late. But he's also attracted by Annette, the daughter of the French proprietor of a restaurant he likes. Its Soames' dissatisfaction and yearning that sets the main thread in motion.

Jolyon Forsyte, Soames' cousin, is administering a fund the income of which goes to Irene. It was set up by Jolyon's father (the events happen in the interlude/short story "Indian Summer of a Forsyte") so Jolyon has occasion to see or at least correspond with Irene regularly as he pays out the income. Jolyon is now widowed for the second time.

At the same time Winifred Dartie, Soames' married sister is abandoned by her husband. After years of gambling and fast living, he's run off with a dancer to Buenos Aires. Should she accept the scandal and divorce him? Marriage, and property in marriage, is a theme in the new novel as well.

But also, between the composition of the two novels, World War I happened; significant years, and I thought this novel was much more political than the first. In the world of the saga about the same number of years have passed, but it's all still before the war: the events of The Man of Property take place in 1886; those of In Chancery in the years from 1899 to 1901. But the (Second) Boer War stands in the place of World War I, and thoughts about the Boer War, already ironic enough, become doubly ironic when the Great War is taken into account:

"His grandfather, [Nicholas Forsyte] of course, pooh-poohed the notion, too thoroughly educated in the feeling that no British war could be other than little and professional,..."

Or, in a lighter vein:


"And, sick with nervous anxiety, he [Soames] sent out for one of the 'new-fangled' motor cabs...The cab was passing villas now, going a great pace. 'Fifteen miles an hour now, I should think!' he mused; 'this'll take people out of town to live!'"


"Never again would a queen reign so long!" [at the death of Victoria]

Not at least until the very next reigning queen...

So I thought this was a very good follow up in the series. In comparison to the first, it shows the same satirical wit overlaying a family drama with feeling and sadness. It adds a political layer, not surprising in a novel written in 1920; one had to either completely ignore the events of the world, as escape, or deal with them. I did think the portrayal of Soames was a bit less rounded in this one: in The Man of Property, one feels for Soames a certain amount of pity, though in the end he behaves badly. He behaves badly from the start in In Chancery, but I thought the deck was a bit stacked against him. For instance,


"...he had spent five hot weeks in Italy--looking into the Renaissance--not so much in it as he had been lead to expect--..."

In the first volume that sort of dig that would have been made about a generic Forsyte; here it's about Soames.

Also, seriously, what the world needs is a non-spoilerific Forsyte family tree.

On to the next interlude, and then volume, of The Forsyte Saga!

For another #1920Club review of In Chancery, see Ruthiella's here. Thanks to Kaggsy and Simon for hosting!