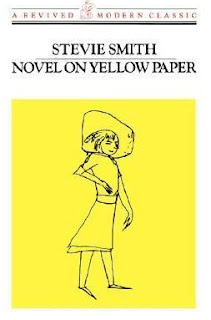 Well, that's the question we're here to ask this week, isn't it?

Pompey Casmilus is the private secretary to Sir Phoebus in the publishing business. She's the narrator of the novel. She's well-educated--the book drops into German, French, Italian, Latin, Greek along the way--and she has literary aspirations of her own: she writes poetry. We're given samples. "That bit...is a poem I wrote, the way I wrote that other one I was saying and never got published. That's two off my hands."

We see things in her life; her boyfriends, two main ones, Karl the German that was, and Freddy the London suburbanite that is; her other friends; her relationship with her father, who abandoned the family; her mother, who died while was Pompey was still young; the aunt (the lion Aunt of Hull) who raised her. The WWI veteran who convalesces in her town, with whom she becomes friends; she's twelve at the start of that war. She goes to Germany before Hitler, but just, and is shocked out of her own, much milder, anti-Semitism.

Pompey is interested in the intellectual currents of those years. Not only is there the situation in Germany, but the advent of sex education, Freudianism. I was particularly amused by her critique of classical scholarship--she dislikes Gilbert Murray's translation of Medea, because she finds it too emotional, insufficiently pure in its tragedy, not 'classical' enough. She prefers Racine's Phedre to Euripides' Hippolytus. At the time there was a growing awareness that the ancient Greeks weren't the icy Spock-ians they were long thought to be; Pompey is in favor of the old order. E. R. Dodds' Greeks and the Irrational (1951) would have just sent her round the bend.

Correspondingly it's not a plot-driven novel. It's interested in the state of the 'modern' woman, and the back cover asks, '...but must she marry?' And it's true that's a question, but it's not the question; there is no conflict with an epiphany to wrap it all up.

Instead, I say it's a novel of voice. So, let's have some quotes!

Yes, it really does say often sometimes, and it ends on the ellipsis in the original.

"But first, Reader, I will give you a word of warning. This is a foot-off-the-ground novel that came by the left hand. And the thoughts come and go and sometimes they do not quite come and I do not pursue them to embarrass them with formality to pursue them into a harsh captivity. And if you are a foot-off-the-ground person I make no bones to say that is how you will write and only how you will write. And if you are a foot-on-the-ground person, this book will be for you a desert of weariness and exasperation. So put it down. Leave it alone."

That comes on page 38 in my New Directions reprint. So the warning is pretty early--but not at the very beginning...

"Astarte, Gave a Party, In Cromarty, Everyone was Rather Hearty."

A poem Pompey makes up spontaneously for Sir Phoebus.

"Harriet is also having troubles with her young man that sweet boy that is so very serious, and very teaching. Harriet is much more intelligent I think because she is not always being so serious. But this boy friend who is called Stephen, he is very serious indeed, and has never grown up out of being an undergraduate."

Anyway, you get the idea. Funny, thoughtful, but perhaps just a bit exasperating? If you've read it, what did you think?

There are several of Stevie Smith's own illustrations in this; the cover art is drawn by her. They're always fun.

It's the 1936 Club hosted by Simon and Kaggsy this week. Thanks to them for hosting! 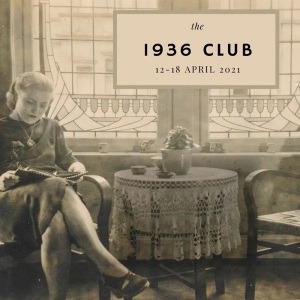